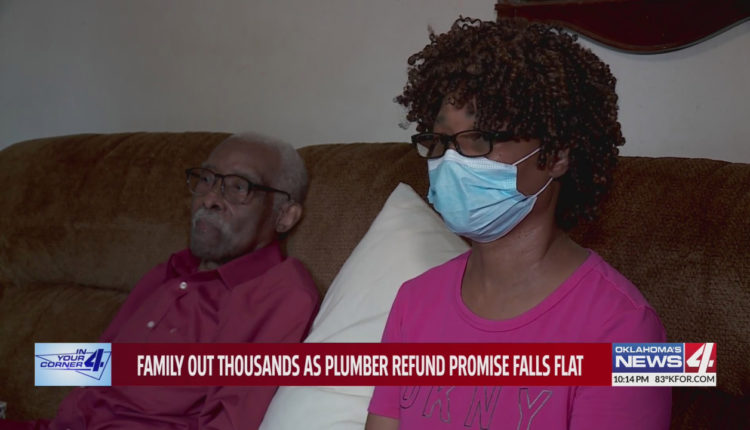 IN YOUR CORNER: Family out thousands as plumber refund promise falls flat

OKLAHOMA (KFOR) – Paula Mason’s parents had been through some rough times.

Her 93-year-old father suffers from dementia. In the spring of 2020, her now deceased mother was housebound and required hospice care.

Amid all this, the couple’s plumbing began to deteriorate.

IN YOUR CORNER: Oklahoma hole in wall fights for future after floods

The problem persisted for months, with workarounds on the way.

But come fall, Paula says the flood has reached a breaking point.

“The water was almost up to the door, maybe two inches deep,” she explained. “Carpets were already soaked.”

She contacted Steve Maxson, who had used his services on her hot water heater months earlier.

Operating under the name Maxson Plumbing, Paula says Steve asked for $3,100 up front.

But the work soon stalled.

“He first explained that he was very busy and I understood that he would be back in a few days,” said Paula. “He never came back.”

With the problem worsening and her parents trapped in the mess, Paula says she needed immediate help.

She eventually chose to hire another plumber who could get to work right away and asked Maxson for a refund.

IN YOUR CORNER: Tulsa moving company comes through for deserting family

In text messages sent to Paula, Steve initially agreed to refund but claimed he was waiting for money from suppliers.

But that was early November. Paula tells our team she hasn’t heard from Steve since, and attempts to take him to court have also failed.

“It was very stressful,” she says.

Steve Maxson is the son of a Stephen Maxson from Afton.

Stephen Sr. is a plumber herself and owns a business in eastern Oklahoma.

He tells our team that he knew nothing about Paula’s situation.

“That’s not this company,” Stephen said. “And if he did, his… [expletive] should be in trouble.”

Stephen Sr. helped our team get in touch with his son.

Steve Jr. claimed that Paula quit his job too soon, but said a refund would follow soon.

IN YOUR CORNER: First responders get tuition refunds as complaints against the instructor continue

Paula says her family desperately needs that repayment, but hopes they won’t have to use the money anytime soon.

She tells our team that others can learn from her story.

So far, Paula has not heard from Steve Maxson. He now also ignores calls and texts from News 4.

We learned that Steve is not a licensed plumber. He tells our team that he was planning to outsource Paula’s job.

To check your contractor’s certification, go to the: The website of the construction industry.