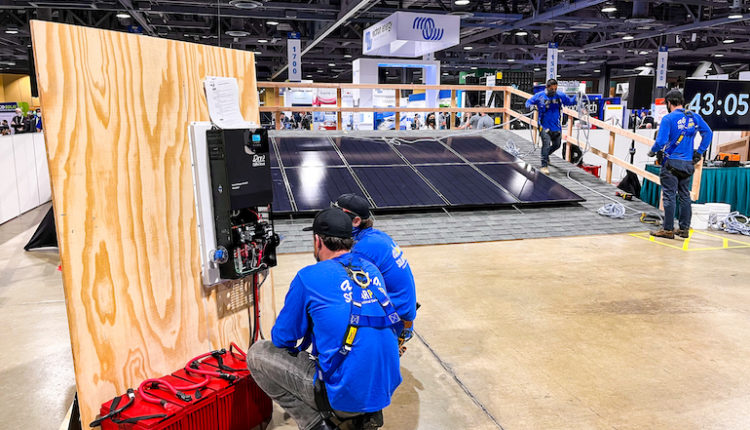 Hybrid, battery and PV inverters — what are their roles?

An AC-coupled installation using both an SMA PV inverter and battery inverter.

When installers plan a residential solar project that may be paired with batteries now or in the future, they must choose the right power electronics to make moving that energy around as affordable and efficient as possible. Inverter manufacturers offer plentiful options, each with their own pros and cons.

Here are the different types of inverters involved in residential solar + storage systems.

A wide range of AC-coupled inverters can be paired with more equipment to build a solar + storage system. Standard PV inverters include one input for solar panels, then feed that power to the home’s electric panel.

battery inverters are required to add batteries to solar power systems already equipped with standard PV inverters. These devices have an input specifically for batteries. They take that AC power generated by the PV from the home’s electric panel and convert it back to DC power to be stored in the battery, then back to AC when it’s time to use the stored energy in the home. Battery inverters are used in retrofit scenarios when a homeowner wants to add storage later.

Battery inverters like SMA’s have multiple battery inputs to expand the system size over time as needed. They’re also brand-agnostic, so any compatible batteries can be mixed and matched in the system.

“It’s flexible for the installer to provide a homeowner with a small system if they want a small backup system, or a fairly large battery backup system,” Lamandola said. SMA’s compatible small battery size is 16 kWh, while the large option is 96 kWh. However, SMA is not compatible with smaller battery sizes like those offered by LG and Tesla.

Enphase’s IQ8 microinverters also allow for AC-coupled storage systems, but they’re unique in that they can act as both PV inverters and battery inverters due to their bidirectional capability — they can move power both ways, from DC to AC and vice-versa . Because of this ability, they perform different functions across a solar + storage system.

At the panel level, the IQ8 converts DC solar power to AC power, then feeds it into the home’s electric panel to be used. The separate Enphase IQ Battery houses IQ8 microinverters inside that handle the power in an opposite direction, taking generated AC power and converting it to DC power stored by the batteries. When it comes time to discharge the batteries, those built-in microinverters will convert the power back to AC to run the home.

Enphase IQ8 systems allow for an even smaller option of battery building blocks, starting at 3.3 kWh.

“It really dramatically lowers the barrier to entry to enter into storage,” said Raghu Belur, co-founder and chief products officer at Enphase. “In Enphase’s case, because I have [an] AC coupled [system]I can start small and I can come back and add more and more storage and match it to whatever size I want.”

IQ8 microinverters are also grid forming inverters† Even without a battery, this microinverter can isolate from the grid and instruct the other components to follow its lead, continuing to power the home while the sun is shining. Enphase calls this function Sunlight Backupwhich requires additional components like load controllers to isolate from the grid and continue producing power.

“Most inverters or microinverters, they have to be attached to the grid, and the grid tells it what voltage and frequency to go to and the inverter follows it,” said Jenya Meydbray, CEO of PV Evolution Labs (PVEL). “In the case of a grid-forming inverters, it doesn’t need the grid to tell it what to do.”

The Sunlight Backup capability of the IQ8 is unique — typically, grid-forming inverters are connected to a battery, said Todd Karin, technical head of power electronics at PVEL.

“I’ve been in this industry since 2006, and solar has been a grid-tied solution. The grid is the boss and we are just current source into the grid and we rely entirely on the grid to operate,” Belur said. “I think the IQ8 really fundamentally breaks that down and says, ‘OK, I will convert all the available irradiance into power.’”

Hybrid inverters are always DC-coupled devices that perform the functions of both a PV inverter and battery inverter, all in one unit. These inverters have multiple inputs, both for PV and for batteries. They’re typically chosen when a homeowner is installing storage at the same time as PV.

Installers connect a MidNite Solar hybrid inverter to a battery stack at the 2022 Solar Games.

“I think the general industry trend is shifting and moving toward the hybrid approach, and that’s really indicative of the maturity of the industry and the economics of battery costs coming down and more homeowners considering adding batteries at the time of adding PV,” Lamandola said .

Hybrids offer a number of advantages. They help reduce efficiency losses, since the energy is only being converted at one point. They have the grid-forming capability to run the system using stored energy when the grid goes down. They also minimize the amount of equipment needed for a system, as well as the potential for compatibility issues when using different inverters to piece together an AC-coupled system.

“The system control is easier and works better, you have a cheaper overall system because you only have one inverter for both PV and battery, and you have this DC-coupling so you have fewer conversion steps, so it should be more efficient as well ,” Meydbray said.

There are some downsides to hybrid inverters. Customers would have to commit to including storage in their installation right away for a hybrid inverter to make sense, since hybrids can’t be added to a system with an existing AC-coupled PV inverter. And packing more functions into one small box comes with inherent performance concerns.

“We’ve seen a lot of issues in the field with arcing and things like that, where the inverter should have caught it and it doesn’t. Part of that is just cramming more technology in the field that changes the signals,” Meydbray said. “Hybrid inverters are a much newer technology, so I think there will be even more R&D happening in the space.”

Whether a customer is ready for storage on Day 1 or wants to add it on a few years later, inverters help get the job done.