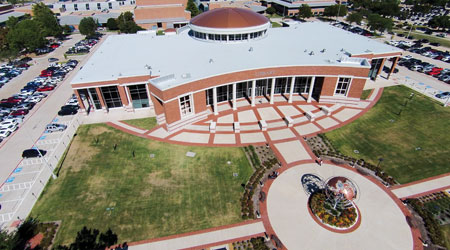 
Things have changed at Collin College in recent years. Enrollment in the nine campuses northwest of Dallas public community college system grew, with 59,000 students pursuing degrees and certificates in more than 100 disciplines.

Kenny Neal, the college’s director of facility services, knew that the changes in enrollment, coupled with the growing demand for heating and cooling, also meant changes to the college’s facilities and HVAC systems. “I tracked the annual electricity costs for (the Frisco) campus of the university, and I noticed an increase in electricity usage,” says Neal. “Some of the equipment also started to age.”

So in 2019, Neal and his team made the decision to invest in upgrades to HVAC systems across five campuses – as well as upgrades for lighting, plumbing and fire safety – with a total value of $ 14.9 million.

Each of the university college campuses is assigned a facility team.

“Depending on the square footage, that staff consists of a facility manager and two supervisors – one on the HVAC side and one on the maintenance side,” says Neal. “Each supervisor has support staff of HVAC technicians and building maintenance technicians.”

The campuses are spread geographically, so that each facility group operates independently.

“Each campus functions as a standalone campus and each facility department of the campus has its own operating budget,” says Neal. “We don’t do overdue maintenance. We have what we call retrofit replacement for equipment that is reaching its life cycle, so we have a budget to replace that equipment as needed. I supervise all facility managers, so whatever they need, they come to me. “

Scoping of the projects

Based on the college’s growing enrollment and the need for greater energy efficiency, Neal and his team took a closer look at the age and condition of existing HVAC equipment across several campuses.

“The two 250-ton units at Frisco were the original 1994 units,” he says. “Two of the three firetube boilers were also the original. Energy efficiency was thus the driving force. ”

Discussions on the scope and timing of the upgrade projects started in early 2018.

“After budget and payback discussions, the projects were agreed,” says Neal. “Construction documents were released in December 2019 and early 2020.”

The Frisco campus received most of the HVAC upgrades.

“On the HVAC side, it is mainly the fan-driven cabinets, the air handling units, the replacement of the motors and new belts,” says Neal. “Some of them needed new sealants and insulation. On the Frisco campus, they have replaced three firetube boilers with four condensing standing boilers, which are a lot more efficient. The campus also has four chillers – two 500-ton units and two 250-ton units – upgraded to four 500-ton Trane units. “

“When we decided which manufacturer to work with, we already had a good relationship with Trane,” he says. “Most of our campuses were already using Trane, so the decision was made to work with Trane.” The decision as to which upgrade projects to run became a group decision.

“I had discussed the list of potential projects and their payback times and the issues decided by the other campuses along with the different projects with the president of the university, who also had input,” he says.

As with most facility upgrade projects, Neal, his team, and the installers ran into problems. Not surprisingly, it was high on the list of hurdles to keeping employees, students and staff safe while observing COVID-19 precautions while avoiding interruptions to the college’s core business – education.

“The biggest challenges were related to phasing the work and planning the replacement of the equipment in in-service facilities,” he says. “COVID hit at the right time and at the wrong time. Sometimes it was difficult to get the shipments in, and sometimes it was difficult to schedule working hours around class hours. We couldn’t do everything at night. Some things have to be done during the day. Replacing the boilers at Frisco was a challenge because we were still in operation. We had to do it in stages. Then the cold weather hit some kind of bad time. It was challenging, but they worked through it. “

Prior to the closure of COVID-19, Neal and his team had scheduling issues. Shutting down equipment while facilities were occupied posed a tough challenge.

“When they did the air handlers, it took them maybe three or four days to freshen up that air handling unit,” says Neal. “It has proven difficult to move classes that were affected by the shutdown of the air handling unit, as some classes were specific classes that could only be used in those specific rooms. We couldn’t just move those classes, especially if they were labs. And we really couldn’t do that kind of work at night. “

Much communication and collaboration was required to plan the work to meet the needs of students and staff.

“We worked around it, but it was challenging because there were a lot of moving parts involved when the vice presidents of each campus were involved in rearranging classes,” says Neal. ‘And then you have facilities and the contractor. For me that was the biggest challenge: trying to limit the discomfort as much as possible. “

Despite the hurdles, the completed HVAC upgrades have delivered the intended results.

“The boiler they replaced at Frisco is performing better than expected,” says Neal. ‘We’ve had some pretty cold nights and the guys have reported that only two of them are running. That campus is over 500,000 square feet, so that’s good. We have not had long cold weather, but that is quite encouraging.

“We only had one chiller running because we didn’t have the load, so that’s difficult to estimate. We will feel that better when everything is ready and we will have more problems when the students come back. “

The HVAC upgrades will continue in 2021 as Collin College strives to keep its equipment up to date and as efficient as possible to meet the demands of a growing student population.

“By 2021, we have two sectional boilers on our Plano campus, and they are the original units of 5 million Btus each,” says Neal. “They have been rebuilt and are on track to be replaced hopefully in the summer of 2021. On the Frisco campus, we have a culinary arts campus of approximately 10,000 square feet. In 2008 it was converted from a natatorium to culinary arts. At the time, they placed the area on DX units. Now we want to integrate that area into our chilled water system. The DX units are not that energy efficient. “