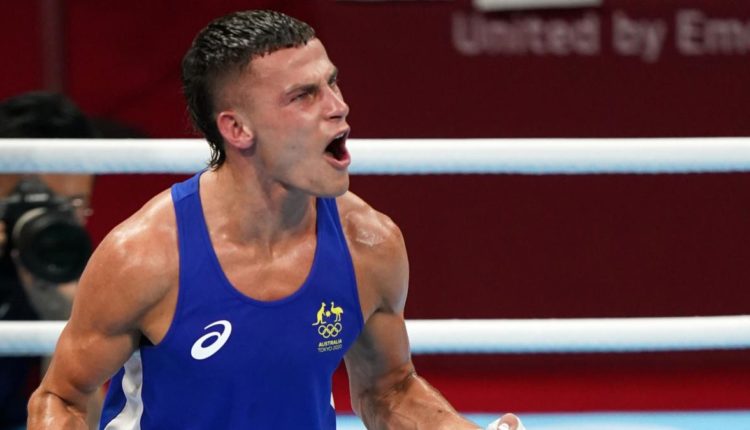 Harry Garside, Australia’s ballet-dancing plumber, is through to the men’s light boxing semifinals where he is guaranteed to take home at least a bronze medal at the Tokyo Olympics.

The Victorian was the winner by split decision against Kazakhstan’s Zakir Safiullin on Tuesday night and will now fight the world number one Cuban Andy Cruz on Friday for a shot at the gold medal.

“I knew it was really close … I thought I may have edged it, and it was almost like time stood still for a little bit,” he said post-bout.

“Tomorrow’s all about making weight.”

He headed to Tokyo as the reigning Commonwealth Games gold medallist but came up a class to compete in the 57-63kg category at the Olympics.

Garside narrowly took the first round but lost the second as the fight headed into a third and final round.

It was a tight tussle with both fighters trading frenzied blows in the final round, but the elated Aussie came out on top to advance to the semi finals.

It’s a remarkable rise for the 24-year-old who first took up the sport at the age of nine.

The youngest of three boys, Garside said his family were shocked by his decision to box due to his size, so he turned to a secret weapon to pack a knock out punch.

“Ballet’s very tough, the power through the legs that they generate, the coordination, everything is just so extreme.

“It’s my little advantage so you take what you can get.”

Garside will fight Cruz on Friday before the winner advances to Sunday’s gold medal match.

“I really think if I listen to coach, trust in my instinct, and trust in my ability, I can get the job done. It’s going to be hard, but it’s the semi-finals of the Olympics. You can’t expect it to be easy.”