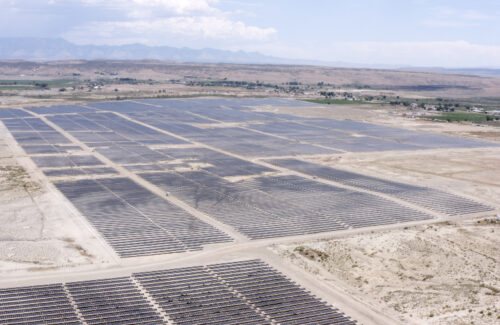 Greenbacker joined project partners and local officials at a commissioning ceremony hosted by the developer on July 12 rPlus Energies to celebrate the completion of the project.

“It is very exciting that Graphite Solar can play a role in helping Carbon County diversify its contributions to the local energy infrastructure,” said Charles Wheeler, CEO of Greenbacker. “A place with a long history of energy production is now home to Greenbacker’s largest operational clean energy project.”

“Bringing new renewable energy and investment to communities where we operate is a priority for Meta,” said Urvi Parekh, director of renewable energy at Meta. “We appreciate the partnership with rPlus and Greenbacker who are providing this new solar power to the Utah grid to support our local operations.”

Graphite has a long-term power purchase agreement with PacifiCorp on behalf of Meta. The contract was developed under Rocky Mountain Power’s Schedule 34 green energy tariff, which helps large energy consumers use renewable energy sources to meet their clean energy goals.

Greenbacker, rPlus and project EPC Sundt Renewables have also invested in the community and its staff with a scholarship program. The Local First Scholarship – Graphite Solar program offers $75,000 to students living in Carbon County who plan to pursue their career goals locally after completing their certificate or degree.

“A lot of work, dedication and collaboration has gone into getting to this point,” said Luigi Resta, rPlus president and CEO. “We are extremely proud to be able to contribute to the continuation of the energy legacy that is Carbon County.”

Greenbacker acquired Graphite Solar from rPlus in December 2020 and signed a contract with the developer to manage the project during construction. Construction involved installing 1.5 miles of transmission lines and 257,700 solar panels and supported 273,800 hours of construction labor.

Greenbacker’s fleet of clean energy projects includes more than 2.6 GW of generating capacity (including graphite and assets to be built).