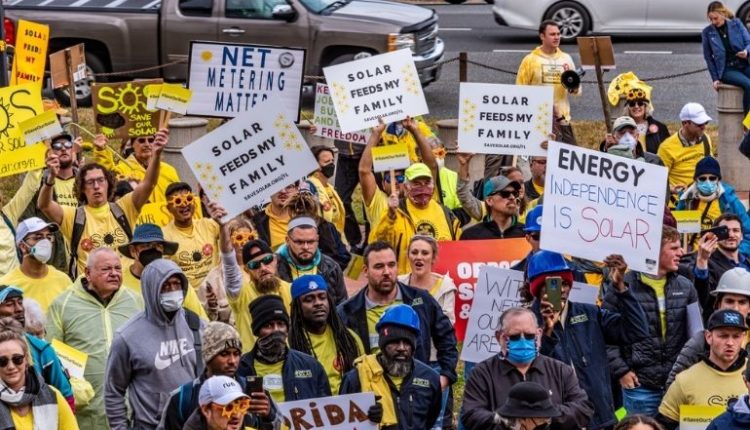 On April 27, Gov. Ron DeSantis vetoed House Bill 741, which would have undercut the state’s growing rooftop solar market by phasing down net metering and allowing utilities to charge potentially unlimited fees on thousands of solar customers in the state.

Solar advocates pushed back against the bill from the start, organizing protests at the state capitol and other efforts.

In his veto letter, DeSantis wrote, “Given that the United States is experiencing its worst inflation in 40 years and that consumers have seen steep increases in the price of gas and groceries, as well as escalating bills, the state of Florida should not contribute to the financial crunch that our citizens are experiencing.”

Many solar industry groups expressed their relief at the action.

“Today, Governor DeSantis helped secure the livelihoods of thousands of solar workers and protected the rights of Floridians to lower their electricity bills with solar. Florida is one of the fastest-growing solar markets in the country with new businesses popping up all across the state. This veto signals that Florida’s energy economy is open for business, and that the rights of state residents should be placed ahead of monopoly utility interests,” said Abigail Ross Hopper, president and CEO of SEIA, in a statement.

“We’re thankful for the tens of thousands of Florida residents who have spoken up against this harmful legislation since it was introduced last fall,” said Heaven Campbell, Florida State Director for Solar United Neighbors. “This victory is a testament to what can be accomplished when people from all backgrounds and political affiliations come together in support of fair, common-sense policy.”

“By vetoing this anti-net metering bill today, Governor DeSantis protected Floridians’ rights to energy freedom and ensured solar energy remains a strong economic force and job creator in the Sunshine State,” said Tyler Duvelius, director of external affairs for the Conservative Energy network. “Net metering gives Floridians access to clean, affordable energy and provides an element of choice and competition in the energy market. The practice reduces strain on the grid and diversifies energy sources, benefiting all energy consumers, not only those with rooftop solar.”