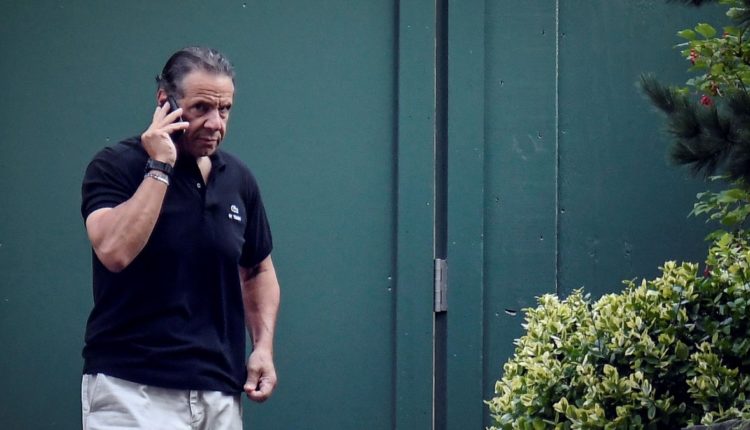 Gov. Cuomo grants clemency to 10 people as he prepares to leave office

Governor Andrew Cuomo on Tuesday pardoned 10 people as he prepares to leave office.

The governor commuted the sentences of five people and pardoned five others.

Nehru Gumbs, 36, earned an associate degree from Mercy College while behind bars and 45-year-old Jon-Adrian Velasquez earned two degrees after enrolling in a college program through Hudson Link.

Both men had their sentences commuted by Governor Cuomo.

Nehru Gumbs, 36, was convicted in 2005 of first-degree manslaughter and second-degree criminal possession of a weapon and assault, crimes he committed at the age of 18. He has served 17-and-a-half years of a 25-year sentence. During his detention, Mr. Gumbs served as a youth counselor with Sing Sing’s Youth Assistance Program, received his Associates Degree in Science (with honors) from Mercy College and is enrolled in plumbing and heating vocational courses and a 4-year college program with Mercy College. After his release, Mr. Gumbs moved in with his family and looked for a job in the plumbing and heating industry.

Jon-Adrian Velasquez, 45, was convicted in 1999 of second-degree murder and attempted murder, three counts of first-degree robbery and first-degree attempted robbery. 25 years to life. After entering the prison system in 1998, he enrolled in a college program through Hudson Link and received an Associate’s Degree in 2012 and a Bachelor’s Degree in 2014, graduating with honors from both programs, and was recognized with an award upon graduation. for outstanding academic achievement and community service. He continues to work with Hudson Link, where he helps run their college program at Sing Sing, and has worked as a lecturer for a professor at Columbia University since graduation. In 2013, Mr. Velazquez helped create ‘Voices From Within’, an educational initiative that fights gun violence through the voices of incarcerated people. The program has been used as an educational resource by the NYC Mayor’s Office of Criminal Justice, the Department of Rebation, and the NYPD. Mr. Velazquez also founded Forgotten Voices, an initiative to bridge the policy gap between inmates, DOCCS administrators and the public. The program has resulted in policy proposals, fundraising for community youth groups, the establishment of a gun buyback program in Brooklyn, a youth mentoring program, and more. After his release, Mr. Velasquez will live with his mother and work on expanding programs such as “Voices From Within” which he developed during his incarceration.

George Martinez, 60, was convicted of second-degree burglary and attempted burglary, and fourth-degree criminal possession of stolen property and attempted criminal possession of a weapon in 1992, 1995 and 2007. He has 15 years out of a 17-year and a half to life. During his detention, Mr. Martinez has worked on earning his GED, and has become a well-regarded chef, providing volunteer cooking services for several events, including cooking meals for 200 guests at a ceremony in front of New York Theological Seminary. After his release, Mr. Martinez live with his son and continue his work in the food supply.

Dontie Mitchell, 41, was convicted of first-degree theft, criminal use of a firearm and attempt to knowingly create/possess dangerous contraband while in prison, two counts of first-degree attempted robbery, two counts of second-degree criminal possession of a Weapon, and fourth-degree grand theft in 1997 and 2003, including crimes he committed at age 17 and while homeless. He has served 24 and a half years of a sentence ranging from 27 to 54 years. During his imprisonment, Mr. Mitchell focused on mentoring other young men who grew up without role models. He has attended courses for his Associate’s Degree through Bennington College, served as a GED tutor and mentored young men in the Mentoring and Nurturing (MAN) program. He has served as Youth Chair of the NAACP’s Sing Sing Chapter and as Education Chair of the Auburn Chapter of the National Trust for the Development of African American Men. Upon release, Mr. Mitchell moved in with his mother and stepfather.

Richard “Lee” Chalk, 63, was convicted of two counts of second-degree murder, two counts of first-degree robbery, two counts of first-degree burglary and second-degree criminal possession of a weapon in 1988, related to an incident in which he was the driver, not the gunner. He has served 33 years from a sentence of 50 years to life. During his detention, Mr. Chalk earned training certificates in a variety of areas, including legal research, food service, sight-guide training, and the Fatherhood and Family Law program. He has also volunteered with Project Care and the American Cancer Society. After his release, Mr. Chalk plans to move in with family and plans to get a commercial driver’s license and resume work as a truck driver.

James Pamphile, 44, was convicted of first-degree bail-jumping and first-degree attempted assault in 2013 and third-degree assault in 2011. After a childhood in Haiti marred by physical and mental abuse by family and members of the community for his sexual orientation, Mr. Pamphile, an accomplished dancer, remained crime-free for eight years. By grace, Mr. Pamphile remain in the United States.

Ivelisse Castillo, 60, was convicted in 2001 of third-degree attempted criminal possession of a controlled substance. Ms. Castillo, a regular volunteer at a community garden, a local rehabilitation and nursing home, and her church, has been crime-free for 19 years. years and is an integral part of her community. A grace will help Ms. Castillo stay in the United States with her extended family, which includes her son, mother, sister, and grandchildren.

Jorge Quinones, 47, was convicted in 1996 of attempted criminal sale of a third-degree banned substance. Since his conviction, Mr. the cybersecurity industry, including building communications helmets for the US military. 25 years crime free, a pardon will Mr. Help Quinones stay in the United States with his family, including his wife.

Miriam Ordonez, 40, was convicted of third-degree attempted criminal sale of a banned substance in 1999, when she was 17 years old and worked in a coffee shop run by a drug dealer who sought out and abused undocumented children, and disorderly conduct in 2016. survivor of domestic violence, a pardon will help Ms. Ordonez stay in the United States with her children, including her newborn baby and two children with unique needs.

Catherine Valdez, 35, was convicted of attempted second-degree robbery in 2002 when she was 16 years old. Since her conviction, Ms. Valdez has worked as a healthcare professional and earned a Personal Care Assistant certificate. She is currently working towards achieving a Home Health Aid certification and hopes to become a nurse. A single mother and sole breadwinner for her four children, a grace will help Ms. Valdez stay with her family in the United States.