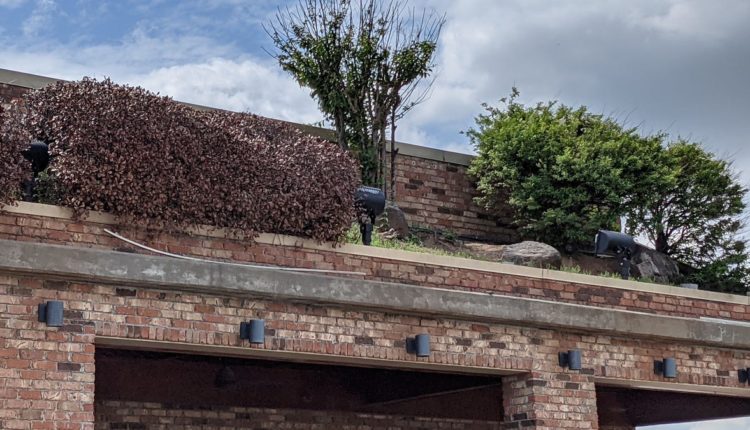 The Hanging Gardens of Babylon were built in 500 BC. Stone arches were covered with layers of tar and reeds before trees and plants were added. Some of the most famous of the green roofs.

The # 5 presentation in the Oklahoma State University Shackleford Series took place on May 13. Brad Rowe, director of the Michigan State University Green Roof Project, appeared on my computer screen and presented “The Role of Green Roofs in Sustainable Development.” The Zoom presentation went smoothly at my place. It might as well have been plagued by low bandwidth, interrupted internet connections, or a cat running across the computer keyboard.

Two days before the lecture, the two toilets at my house went from slow to flood stage. The plumber came up with his giant roto-rooter, took out some tree roots, and fixed the problem. The utility room was flooded that night. The backflow from our calcium magnesium cylinder went all over the room because the septic tank pipe was blocked again. Problem back. A dead squirrel was found when the septic tank was emptied the next day. It may have blocked the line from the house to the tank. The little man must have examined the roof vent pipe and somehow tumble to the outflow pipe. A case of curiosity killed the squirrel. After a few shocked exclamations and head shaking, the little squirrel was buried between two pine trees. Problem solved.

If only we had a green roof. The squirrel may not even have seen the pipe. A living roof with grasses, shrubs or even trees. When we lived in Germany, we saw several houses and businesses with roofs without tiles, but with low-growing plants. I wondered what the weight of such upholstery was, as well as the maintenance. If you’re from Oklahoma, you need water to keep things alive in the summer. Admittedly, Germany’s climate is more temperate, heated by the North Atlantic Current, and rains fall all year round. In Oklahoma, heavy downpours can alternate with prolonged droughts. A strange balance between humid, subtropical eastern Oklahoma and semi-arid western Oklahoma.

Germany is a leader in green roofs, which can be divided into two categories: intensive and extensive. Intensive roof design is for people, has deeper bottoms, taller trees and shrubs limited to flat roofs or terraces. The extensive green roof usually has a shallow soil (4 “-6”) limiting plants to succulents and drought tolerant species.

In Vancouver, Canada, one hotel roof supports a natural forest. The Church of Latter-day Saints in Utah is surmounted by a natural prairie with surrounding tree-lined terraces. Chicago City Hall’s semi-extensive green roof (half an acre) has been proven to reduce the urban heat island effect and improve air quality. Installed in 2001, there are 20,000 herbaceous plants, including a Cockspur Hawthorn and Prairie Crabapple. Chicago has 200 green roofs.

The High Line was an elevated rail system in Manhattan. The nonprofit Friends of the High Line now planted and maintains 1.45 miles of perennial perennials that live in 18 inches of soil. The High Line has become the number 1 tourist attraction.

Roofs are wasted spaces. One reason for green roofs is the control of rainwater. The current and immediate runoff are constant battles, especially in urban areas. Options are available to absorb excess rainfall. Swales (shallow depression with low slopes), phytoremediation (using plants to control water and contaminants) and retention ponds are just a few ways to get rid of excess water.

With a green roof, peak overflow is spread over a longer period of time, not the sharp discharge of precipitation in a short period of minutes as with conventional roofs. Significant amounts of rain are retained and used by plants. An asphalt roof will last 20 years, a wood shake roof maybe 30 years and a properly installed green roof more than 40 years. Green roofs offer significant energy savings, depending on the location and building type. They are living layers of insulation.

The plant cover is aesthetically pleasing, dampens sound, boosts health and provides nutrition. Carrabba’s Italian Grill in Tulsa has trees and shrubs growing on the porch roof. Other restaurants grow fresh seasonal produce for rooftop salads. Brooklyn Grange at Navy Yard Farm has three green roofs in New York City that cover 5.6 acres. They harvest over £ 100,000 of organic produce a year! The hives on rooftops and other shelters in NYC ensure pollinators.

Roof gardens temper heat in the city and reduce air pollution. They reduce vandalism from humans and vermin, but provide a sanctuary for native plants and increase biodiversity. Since 1914, one green roof has existed in Zurich, Switzerland, with orchids that are found nowhere else in the world. The surrounding nature reserves have long since disappeared.

If you are ready to save the loss of green space where you live, consider a green roof. Dr. Rowe’s doghouse has a green roof. His two dogs approve. Determine your intent and level of expected maintenance. The roof should be flat or slightly sloping and structurally sound. Base layer is a waterproofing membrane topped with a root barrier, drainage layer and growing media. Use lightweight, porous, well-drained growing media such as heat-expanded shale and clay and organic plant mixes. Plants, trees, shrubs, plugs, seeds and cuttings can be placed in the growing media, as well as modules and pre-grown mats.

Take into account the environmental conditions of the roof (wind, rainfall, temperature). Choose plant varieties that can handle the rooftop environment. Sedums are often planted on green roofs as they grow slowly and can withstand drought. Native prairie plants and perennial perennials are options.

Let the roof go wild or weed it or mow it. Burn it? Ducks Unlimited Interpretive Center in southern Manitoba performs a prescribed burn on the 1.10 acre rooftop of native grasses and wildflowers every four to five years!

Becky Emerson Carlberg, a graduate of Oklahoma State (plant pathology) is a teacher, artist, writer and also a certified Oklahoma Master Gardener and Master Naturalist. Contact her at Becscience@att.net.