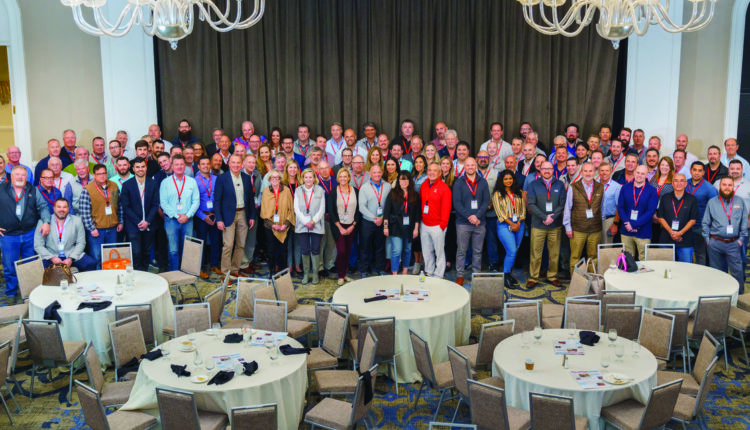 Dallas—Some industry groups “preach” the gospel of partnerships. Fuse Alliance—the member-owned network of professional commercial flooring contractors—actually practices it. That notion was on full display at the group’s recent convention here earlier this month as scores of Fuse Alliance members and vendors gathered in person for the first time since the novel coronavirus pandemic began disrupting major industry events on a large scale across the US

“You all are my family as far as I’m concerned,” said Geoff Gordon, Fuse Alliance executive director, in his opening remarks to convention attendees. “Everyone is so excited to get back together, which has helped fuel the enthusiasm with the whole membership. When I look back over the two years where we haven’t been together, I really don’t know how we got through it. What we’ve accomplished has been amazing.”

Gordon attributed the group’s achievements—record sales growth amid a bump in membership in a tumultuous, uncertain environment—to network partners coalescing to support each other and solve common problems and challenges. “I think this group came together more because we were all helping each other out,” he told FCNews† “In looking back over the past two years, I would say that they were two of the best years our organization has ever had because we really worked together to figure out what the hell to do.”

Hence the thinking behind the timely theme of this year’s conference, “Power Through Partnership.” As Gordon explained: “We could have never gotten through this without the members working together, but just as important is our relationship with our suppliers and how they all supported us. This organization would not exist without our suppliers.”

Truth be told, Fuse Alliance did more than just survive over the course of the past two years. The group increased its contractor membership ranks—more than 25 new members during the pandemic—while adding about nine suppliers. This was reflected in the attendance at this year’s conference. “There are 100 more people than were here two years ago, and that includes suppliers as well,” Gordon said.

At present, Fuse Alliance encompasses more than 130 companies in 225-plus locations across North America. A preliminary tally shows there were more than 154 contractor members in attendance. By Gordon’s count, that represents about 85% of membership—on par with pre-pandemic years. “I think this has been way better than I would have imagined,” he said.

But it’s not just about growing larger for the sake of scale. Member revenues are up, along with overall purchases of products from core vendors. “We finished up 22% on 2020, and we were up 4% on 2019,” Gordon said. “I would never have envisioned that in 2021.”

On some level, Gordon chalks up Fuse’s good fortunes to a less quantifiable metric—karma. “Two years ago, we had our meeting in early March; had it been two weeks later it would have been canceled,” he recalled. “California had shut down in San Bernardino County as COVID-19 cases escalated. Fast forward to this year; our timing turned out to be great because the Omicron variant is now in freefall. We’ve been really, really lucky.”

At the same time, Fuse Alliance leadership knows few good things happen simply by chance. The success that members and suppliers collectively achieved in the past two years required close coordination and cooperation. “I can’t believe the camaraderie of this group,” Gordon said.

That’s not to say that the strength of those bonds among members—and between suppliers and members—wasn’t certainly tested over the past two years. In the end, according to Gordon, it all came down to trust. “I think, generally speaking, we’ve broken the walls down where people aren’t afraid to talk about their businesses or their challenges and opportunities and then sharing it with other people,” he explained. “We were doing roundtable Zoom calls every week. We had a lot of members ask, ‘Hey, what are you doing on jobsites?’ ‘What are you hearing from the general contractors?’ ‘What are you doing in your own office?’ We brought in experts to help on top of the members sharing their ideas.”

In that same vein, suppliers were checking in with Fuse contractors on a regular basis to see how they could help. “From the beginning the suppliers were all calling to ask members what they needed,” Gordon recalled. “They would ask things like, ‘Do you need special pricing?’ We said, ‘No, the best thing we can have is terms,’ because we have all these jobs that have been shut down or delayed, and we don’t want to have to pay an invoice on material and sit on it for another three or four months. In the end, every one of our suppliers extended terms, which was huge for us during the pandemic.” New and longtime Fuse Alliance contractors alike attestation to the impact that membership has had on their businesses. Case in point is Brian Boek, chief sales and marketing officer, Christian Brothers Flooring and Interiors, Lakeside, Calif. He said the affiliation with the group definitely helped him weather the storm these past two years. “One of the best parts of the last two years with Fuse has been the collaboration as the pandemic evolved,” he said. “For several months we had weekly calls to share ideas, business practices, concern for employees, job delays and shared ways to combat the challenges. I truly feel that grew our relationship and growth as a group.”

Another veteran, John Finch, president and CEO of the Legacy Group, based in Renton, Wash., shared that sentiment. He said there was “a lot of direct engagement, communication and support” during the rough patch.

M&S Commercial Flooring, based in Franklin, Ohio, came on board last fall. Mike Webster, president, predicts membership will only help his business. “We believe joining Fuse Alliance will help us better serve our customers because we will have access to resources and knowledge shared by the best flooring companies in North America.”

Ditto for Young Office, a nearly 70-year-old, family-owned business with three showrooms located in North Carolina and South Carolina. Thomas Young, president, predicts the company will only get better as part of the group.

According to Gordon, the timing is right for independent contractors to get aligned with reputable groups like Fuse Alliance. “There are a lot of good, independent companies out there who don’t want to be alone anymore, especially in these crazy times.”

Despite the current state of affairs, the group’s outlook remains bright. “In all the years I’ve been in this business, I’ve never seen so many headwinds that should screw up business,” Gordon said. “Still, business is really good.”

Christian Brothers’ Book, who is forecasting another strong year, concurred. “There are two choices: curl up in a corner, live in fear and do nothing or continue to drive forward, stay positive and make a difference in the crazy world we live in,” he said. His company is still seeing a lot of activity in the healthcare, multi-family and government markets.

Legacy Group’s Finch, who’s coming off a year in which he booked $50 million in business, is facing an incredible backlog this year.

Buy Smart: What to Look Out for When Replacing Windows in Southern California