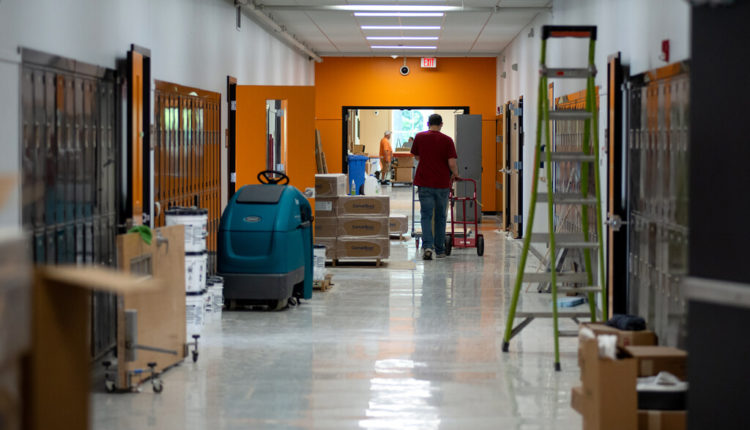 From new HVAC to social workers, Maine schools figure out how to spend millions in relief money

Brewer High School is lining up for a number of building upgrades, starting with the new HVAC system going in now.

Nearby, RSU could add 22 to Hampden Academy, an extension that would provide new classrooms that provide more space for social distancing.

And across the Bangor area, school departments are planning a variety of initiatives to help students recover from the COVID-19 pandemic, both to catch up academically and to cope with the emotional impact of a chaotic year plus.

Maine’s school districts have received tens of millions of dollars from the latest COVID-19 relief package passed by Congress in March. While many are still figuring out how to spend the money, some have already set plans in motion.

The American Rescue Plan will send $411 million in educational resources to Maine, and $370 million will go to local school districts. So far, the state has $274 million of that money in hand but hasn’t spent it yet, according to state and federal data. There is still money left over from the federal government’s first two COVID aid packages, but the American Rescue Plan’s pot is by far the largest.

In addition to replacing the high school’s HVAC system, Brewer plans to use some of the projected $2.7 million in aid to hire more social workers, particularly in high school, and to run a tutoring program. Start, Chief Inspector Gregg Palmer said.

Federal rules require districts to use at least 20 percent of their funds to help students reclaim academic ground they may have lost since the COVID-19 pandemic struck, with few restrictions on how districts can use the funds to help students to catch up on their arrears. Schools can also use the money to cover the costs of responding to the pandemic.

Districts must commit all of their funds by September 2024.

After that, Palmer said, Brewer would include the new social workers in his regular budget.

In the Bucksport area, RSU 25 plans to use a portion of the $2.6 million it receives to hire a home health social worker so the school district can reconnect with families and keep them informed. may consider available support programs when they return to school this fall, Superintendent James Boothby said.

The district also plans to use the money for academic support, including after-school programs and summer school, Boothby said.

Bangor schools will receive almost $13 million of the American Rescue Plan, and the city’s school division began holding community meetings this week to gather input on what it should do with the money, Chief Superintendent James Tager said. The department also circulates a survey to collect community input.

While Bangor hasn’t completed any projects yet, Tager said the school department planned to set up a mentorship program to bring children back into the classroom and provide them with adults to serve as role models and discuss challenges such as back-to-school issues. . .

The school department is aiming for 500 mentors, Tager said, a goal he said was “ambitious” but necessary.

“We know the differences a significant adult can make” in college students’ lives, he said.

In Hermon, the school department’s hybrid schedule last year — in which students split their time between distance learning and face-to-face — led to some delays in subjects, including math, Superintendent Jim Chasse said.

As a result, Chasse said, the city expects to use some of its $1 million in aid to hire additional staff and teachers to help students who have fallen behind, but “not in a way that a student feels “Hey, you ‘I’m running behind, hurry up,'” Chasse said.

Hermon also plans to use some of its funds to cover the financial losses associated with the hybrid scheme. For example, the school lunch program still had to make food, even though only about half the normal number of students were at school every day.

“We have not reduced our workforce,” he said. “We still had to make food.”

RSU 22 – which serves Hampden, Newburgh, Frankfort and Winterport – still has no definite plans for the $2.5 million price. The district is exploring ideas and holding meetings to gather input, Chief Superintendent Regan Nickels said.

One possibility is an addition to Hampden Academy that would add classrooms on the third floor, she said. The neighborhood last month started soliciting bids for that addition.

More articles from the BDN