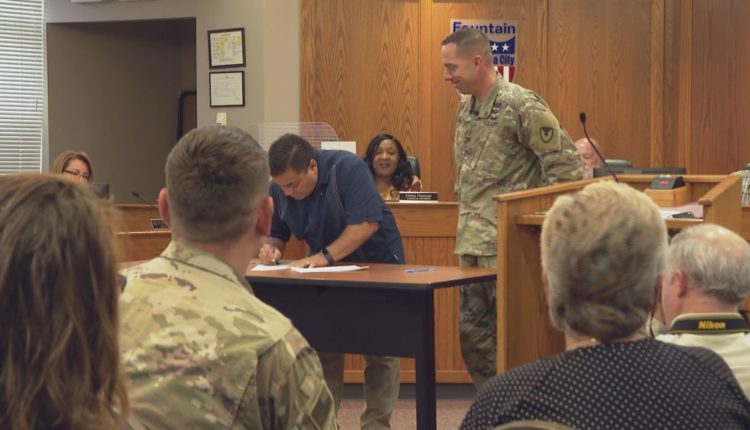 FOUNTAIN — On Tuesday, July 13, the city of Fountain and Fort Carson signed an intergovernmental support agreement (IGSA), allowing the postal service to use contractors already vetted by the city, speeding up the process of small construction projects.

At the city council meeting, an IGSA was defined as an agreement between the military and a state or local government that serves the interests of both parties to improve installation support services for the mission, service member and family preparedness. Those with the city also said an IGSA cuts costs for citizens through contract savings. “If we didn’t have this intergovernmental support agreement, we would have to outsource contracts even for small projects, which sometimes takes months. And now that we have this agreement, we can call on the City of Fountain, they will send their already vetted contractors to the installation, and we will be able to provide service to our soldiers and families much faster,” said Colonel Nathan Springer, the garrison commander at Fort Carson.

The General Facility Construction IGSA focuses on small construction projects, such as electrical works, plumbing or renovations. Examples of these projects are a small renovation of a training room or electrical works in barracks. “Our school districts are combined, our cities are combined, our soldiers and their families work and live here, and now your contractors support this installation. I’m not sure if there is an installation and a city with a closer relationship within the Department of Defense or the United States,” Colonel Springer said at the Fountain City Council meeting.

The IGSA is expected to be commissioned in October 2021.

Colonel Springer said there are more than 70,000 soldiers, relatives and military civilians living or working at Fort Carson. The Post is the third largest employer in Colorado, according to Colonel Springer.

Enter Now: The Roofing Guy’s “Roof For A Reason” Contest