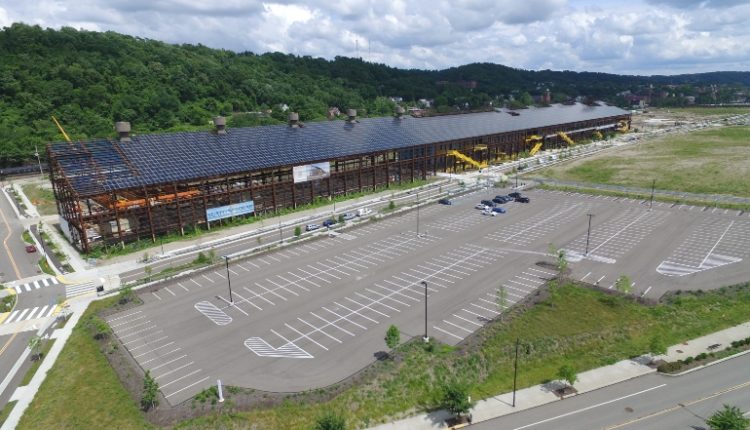 Abandoned steel mills are a common sight in the Rust Belt region. Communities grew up around these factories as the steel industry boomed, employing thousands of people at once, but many suffered an economic collapse and began building formwork in the 1970s.

These buildings are difficult to redevelop because of their scale and corrosion from years of neglect. But a factory in Pittsburgh, Pennsylvania proves it’s possible.

An unlikely partnership emerged between public and private foundations, companies and organizations to revive Mill 19, an abandoned steel mill built in the Hazelwood neighborhood in 1943 – and solar photovoltaics played an integral role in its redevelopment. The old mill now houses the largest long-span rooftop solar panel in the United States and is an indicator of Pittsburgh’s technological future.

The steel manufactured at Mill 19 was used for ammunition production during World War II and at its peak the factory employed about 16,000 people. Long after the plant closed in 1998, residents and regional organizations still considered it a Pittsburgh landmark. 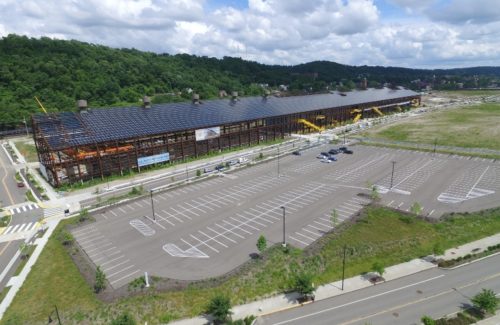 “It was a symbol of pride for all these people,” says Mark Goyke, manager of the special projects department at Airport Solar Solutions. “You’ve talked to everyone in this… [nearby] bars and their old man, or someone else, worked in this steel mill. To repurpose this building here once in a while is just fantastic for Pittsburgh, and it really keeps this heritage and the legacy of the steel mills open. Even if it has been repurposed, this is ‘New Pittsburgh’.”

The rusted skeletal structure of Mill 19 remained untouched for more than a decade. It was not until the 2000s that substantial plans were considered to revive the 178-acre mill site, called Hazelwood Green. Regional organizations the Heinz Endowments, the Richard King Mellon Foundation and the Claude Worthington Benedum Foundation formed a coalition called Almono with plans to redevelop Mill 19. It was one of their ideas to power it with solar energy.

Rather than tearing down the rusted building skeleton, the Regional Industrial Development Company (RIDC) built two commercial office buildings within the factory’s structure and has a third building in the works. Almono is re-developing the factory to create a hub for technology-focused companies and programs.

Almono was looking for a national-scale solar developer for this project, but opted for the local option in Scalo Solar. From initial planning, it took approximately two years for work on the Mill 19 solar facility to begin.

The scale of this project becomes apparent when you drive next to the quarter-mile building. Every possible part of the roof is covered with solar panels, except where old hoods and other steel structures protrude above the roofline. Scalo Solar installed 2 MW of solar energy on the skeleton of the mill and another 500 kW in carports and canopies in parking lots around the mill. The full solar installation of Mill 19 will be completed in June 2020.

“This had never been done before, so there was no specification book,” said Jack Scalo, CEO of Scalo Solar Solutions and part of the Scalo Companies. “There was no design by anyone. We really had to figure this out ourselves through trial and error.”

Access to the roof was not easy, nor was there a flat surface on top of the mill for installers to stand on. To add another wrinkle, the RIDC began construction on the first building at the factory, so there was no usable floor space for scaffolding.

“But as you can see, with all the support structures underneath, you can’t be lifted all the way up. You can’t get scaffolding without a huge building. The price of scaffolding, which we actually priced in, was more than the rest of the contract,” said Cab Whitaker, senior project manager at Scalo Solar. 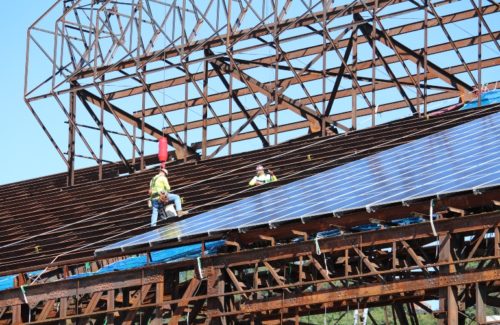 Scalo Solar’s installers were able to work on the roof structure thanks to the suspended net, called Spider WorkWebs. Credit: Scalo Solar Solutions

Instead, Scalo Solar commissioned construction company Spider to produce four WorkWebs, suspended nets commonly used in bridge construction that can be walked on. The WorkWebs were sequentially secured at a height of 80 feet at the factory, and when part of the sequence was completed, it just went up the line.

“They built a three-story building under this existing steel structure and put solar power on it, so it’s unprecedented,” said Jesse Ament, marketing director of Scalo Solar Solutions.

Because it was such a distance from the roof, installers set up a staging area on the ground where they mounted the panels in groups of nine at a time. Those modules were then lifted by a 150-ton crane and placed on top of the mill instead of taking up one panel at a time. While one crew was assembling, another was installing.

Due to the construction of a road along the front of the mill, Scalo was forced to lift modules from the rear of the building – where the crane operator could not see through or over the pitched roof. Installers called the crane operator and guided the modules into place. This was done along the entire quarter mile length of Mill 19.

Another challenge with this project was the requirement that installers fasten the array to the factory without drilling into the steel structure, as it is a historic structure. The modules are held in place using custom designed racks with brackets and straps that descend into the structure and are welded to them at most.

There is an SMA Sunny Tripower Core inverter on almost every other column of the mill. Coupled with it are circuit breaker panels that power the inverter and act as combiner boxes.

The project uses LG 390-W bifacial modules, not for the extra generation on the back — Whitaker said there’s almost none anyway — but for their aesthetic. Because there are no back sheets, more light passes through a module, allowing more natural light to fall on the buildings in the factory.

The array on top of Mill 19 will meet all of the facility’s current energy needs and will easily cover the power needs of the third office building, Whitaker said. The carports and canopies are also bonus production.

The redevelopment of Mill 19 and the entire Hazelwood Green site was made possible thanks to both grants and creative use of the investment allowance. Both RK Mellon and Scalo Solar invested in the project and formed a public-private partnership that resulted in the Mill array and additional carports and canopies. Without that partnership, Mill 19’s solar output would not be on this scale. 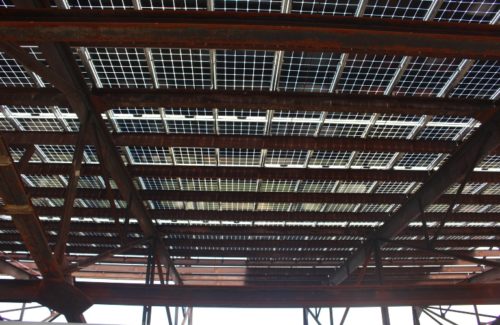 Scalo Solar installed two-sided solar panels on top of the mill without drilling into the structure. While they don’t offer as much backside generation, the two-sided modules allow more natural light into the mill. Credit: Billy Ludt/Solar Power World

However, the entire solar project would not have been possible without one person: Michael Carnahan.

“Mike was the driving force behind this project to explore everything in the field of design logistics. Sadly this turned out to be Mike’s swan song, but Mike was absolutely critical to this project and I doubt anyone else in the city of Pittsburgh could have done this project except Mike,” Scalo said.

Carnahan was a general manager at Scalo Solar and had been with the company since 2011. He died in January, several months after Mill 19 was completed.

“This was an iconic project. It’s our flagship and it’s Mike’s iconic project and Mike’s flagship,” said Scalo. “He really believed in renewables and in solar energy. He was passionate about what he was doing and once again firmly believed in it as a way of life.”

While parts of Mill 19 and Hazelwood Green are still under development, the site already looks revamped. Two modern office buildings have been completed and housed as part of Molen 19, with the third under construction. Current tenants include Carnegie Mellon University’s Advanced Robotics Manufacturing Institute and Manufacturing Futures Initiative. And above it rests 2 MW bifacial solar panels.

“Ultimately, the promise of solar energy is future jobs. It’s industry. It takes that legacy of coal and mill and now turns it into solar,” said Leo Kowalski, consulting program director at the Pennsylvania Solar Center. “There are sales jobs, there is engineering work, there is high level engineering, there is business management. There are so many possibilities that solar energy creates and this is one such visual example. It houses all this new industry and solar energy is connected to it.”