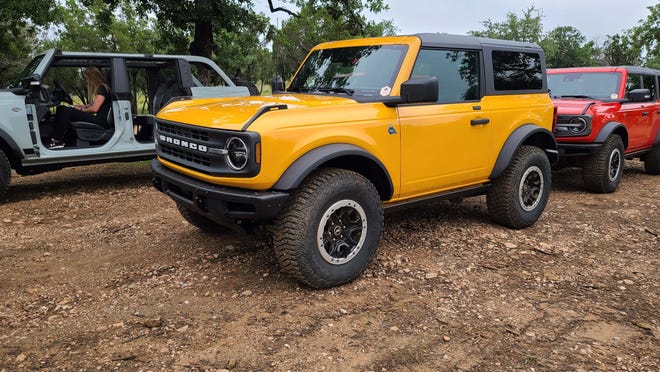 Ford will replace all hardtop roofs to fix quality issue

Ford Motor Co. will replace hardtop roofs on all Bronco SUVs due to quality issues, the automaker said Thursday.

In a letter to customers, the Dearborn-based company said the so-called “pot-in colored hardtops” on both two- and four-door Broncos have been identified with a quality issue that does not affect performance, but an “unsatisfactory appearance when exposed to extreme water and humidity.” The Bronco also comes with a soft top option, and that has no bearing.

The automaker said it doesn’t expect replacement roofs until October, after which updates will be prioritized for the oldest units first. The letter was first posted on the Bronco 6G forum and reported by Automotive News. A Ford spokesperson confirmed its authenticity and the company has issued a FAQ sheet on its website to help customers.

“Our customers who already own a Bronco with a hardtop can continue to drive it in the wild and we will provide them with a new hardtop free of charge as soon as possible,” Ford said in a statement. “Unfortunately, some customers who have ordered two-door and four-door Broncos with a hardtop roof will have to wait a little longer.”

Ford says the issue will affect future production of the Bronco, as well as current customers and order-holders. Fewer 2021 models will roll off the Wayne Assembly Plant and new Bronco orders will now be for the 2022 model year. Bronco customers who have placed an order but don’t have a production date yet can update their hardtop order for 2022 – or switch to a 2021 soft-top model.

The roof problem was a thorn in the side for Bronco, delaying production of 2021 SUVs earlier this year. The removable roof was made by German supplier Webasto, which was struggling to equip its production facility in Plymouth due to COVID-related issues. The new $47.9 million factory opened last year to serve Ford and other automakers.

Previously, Ford pushed two other roof options — a modular painted hardtop and double roof — to the 2022 models so Webasto could focus on getting molded-in colored hardtops and soft-tops. The supplier will make the replacement roofs.

TFLCar.com, one of the most important benchmarking publications in the auto industry, experienced problems with a Bronco First Edition model it bought this year for testing.

Andre Smirnov, a writer for TFLCar, said they replaced the roof after experiencing “a” annoying chatter near the B-pillar.” TFLCar has not experienced assembly or problems with water leakage in his tests, although they did notice some discoloration. They replaced the silver-grey roof (matched with a Cyber ​​Orange body color) with a black soft top purchased from aftermarket accessory supplier, Bestop.

Despite its production issues, the highly anticipated Bronco has received critical acclaim from media and owners for its style, off-road performance and high-tech features. The Bronco is fully focused on Jeep’s Wrangler franchise – and has also spawned a Bronco sub-brand in a Ford Icons brand strategy that includes Mustang and F-150.

The Bronco Sport SUV, also released this year, is selling like hot cakes. It shares Bronco styling cues, but is not built on the Bronco’s ladder-frame truck platform, but on the same unibody architecture as the Escape SUV.

The Ford spokesperson said the company is determined to help Bronco customers with the roof problem. Dealers will pick up SUVs to make the replacement when the time comes, and Ford has offered owners Bronco design posters, ride-and-drive experiences, and Ford Pass rewards points.

The hitches in Bronco follow the bumpy launch of a Ford SUV anther, the Explorer, in 2019. Bronco owner forums are buzzing about the roof issue, but it doesn’t seem to have dampened enthusiasm for the SUV. Dealers say orders are off the charts.

Henry Payne is an autocritic for The Detroit News. Find him at hpayne@detroitnews.com or Twitter @HenryEPayne.