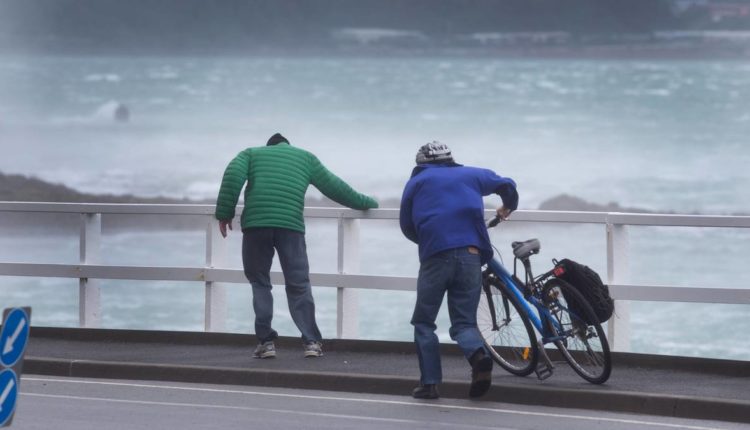 Brace yourself for strong winds in the capital with gusts of up to 140 km/h in some areas. Photo/file, Mark Mitchell

Strong wind gusts of up to 130 km/h in some places disrupt flights at Wellington airport and blow roofs off houses.

The savage weather that has hit the west coast of the South Island is said to engulf the country today – with most parts of the North Island in for periods of heavy, intense rain.

Wellington Airport said the gusts of wind had disrupted the flight all morning.

A spokesman said 46 domestic flights to and from Wellington Airport had been canceled so far on Saturday.

The strong wind caused some disruption to flights to and from Wellington this morning. For the latest updates, please contact your airline or view our Live Flight Information: https://t.co/zPeOJTaJsv pic.twitter.com/yyphHVTiiZ

They had received more than 20 calls since 8 a.m. today to reports of flooding on roads and in private properties.

Crews attended a tree in Oban Street, Wadestown, and there had been multiple reports of flooding, including shops in Adelaide Road, Berhampore.

They also said there was a wastewater overflow that could affect Moa Point’s wastewater treatment plant and advised no swimming or water activities for the next 48 hours.

Motorists are urged to take extra care on the roads in Wellington as heavy rains and high winds hit the region.
We’ve received more than 20 calls since 8am today for reports of flooding on roads and private properties – and it continues to rain heavily.

MetService meteorologist Rob Kerr said strong winds are expected to continue for the rest of the day with a weather warning in effect until 6 p.m.

Severe north to north-westerly storms can cause gusts of up to 140 km/h in exposed places.

Wellington’s Mt Kaukau anemometer recorded peak gusts of 80mph or more between 8pm last night and 1am this morning.

Kerr said the weather would move quickly across the country today – bringing periods of heavy rain to much of the North Island.

“Bang, it’s going to speed up across the street” [the North Island]. It will be quite short to get through it,” he said.

CENTRAL NORTH ISLAND – SEVERE WEATHER WARNING – 13:20@MetService predicts strong winds and heavy rain #SH1 Desert Rd. There is also a strong wind warning for: #SH5 Napier to Taupo. Take extra care if you are in a lighter or high vehicle or riding a motorcycle. ^AP https://t.co/m20hB1pL2l

The region continued to be under heavy rain with Kelburn recording 31mm in the past six hours and 32mm in Trentham.

“The hold for heavy rain lasts until 4pm this afternoon and will be followed by some showers and north-westerly showers for the rest of the day and tomorrow.

“The watch in heavy winds will continue until 3 o’clock tomorrow morning.”

There was also a travel warning for people heading north on SH1, with large waves expected in northwestern parts of the region, such as the Kāpiti Coast and Pukerua Bay.

“With high tide around 3:00 PM this afternoon, we could see some splashing water and debris as SH1 headed north out of town, north of Pukerua Bay.”

He said NZTA would also monitor the road.

SATURDAY, heavy waves are forecast for KAPITI, between PAEKAKARIKI and RAUMATI SOUTH. Swell mixed with northerly winds can cause storm surges of more than half a meter. Watch out for the coast, including Centennial Highway. Stay informed here: https://t.co/Esas92Vw2q

Windy, wet weather in Wellington has caused a power or telephone line on Northland Tunnel Rd to go out, a tree has fallen on Ohiro Rd and there has been a car accident.

Police have been receiving reports of weather in Wellington since 5:45 a.m., a spokeswoman said.

“Flooding on SH1 near Papakowhai … appears to have contributed to a vehicle spinning at 8:20 am. No injuries were reported and the vehicle was towed,” the spokeswoman said.

There was also flooding on Hutt Rd at Kaiwharawhara and Grays Rd at Plimmerton, and there was a small slip in the south lane of SH1 at Newlands.

Fire and Emergency had 28 weather-related calls overnight and responded to 19 in Wellington.

“This morning we continue to respond to a steady stream of requests for help, including surface flooding, trees knocking down power lines and storm damage to property. Our crews are working with power companies where power lines are involved.”

Team manager Belinda Beets said a large part of a roof came from a house in Newtown.

Roof tiles and a sign have also come loose elsewhere in that district.

Steel hung from a roof of an apartment building in Taranaki St in the CBD, and doors were blown out in Ngaio.

Will Nyssa High School get $3M worth of expansion and upgrades? | Local News Stories