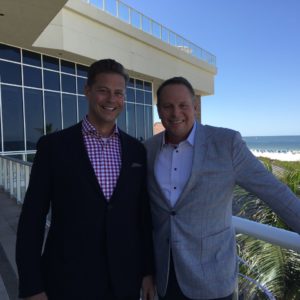 While all other corporate conferences canceled their events at the JW Marriott Marco Island Beach Resort after the epic storm, FEI continued with theirs. It was not a slam-dunk decision. To convince members that the site — and area — was safe, FEI Group chairman Graham Howerton made a solo trip to Fort Myers two weeks after the Sept. 28 hurricane. attendees.

“We’ve decided we’re going to come here and do good,” Howerton said FCNews. “FEI was the first group to commit to a conference, and our message to members was: 1,100 employees work here, and by coming here and supporting the staff, you’re putting food on the tables of people who don’t have a table. . now.”

Several dozen JW Marriott employees were forced from their homes after the hurricane, and many had been out of work while the hotel was closed for two weeks. For them, the FEI conference was a welcome sight. To honor their service, Howerton welcomed the entire hotel staff into the conference room during the general meeting, where they received a standing ovation. The hotel management responded to the gesture with a digital sign in the lobby to thank the FEI Group for making the conference possible.

In the end, 725 FEI members made the journey, immersing themselves in the spirit of “positive disruption,” seeking ways to grow and expand despite possible storm clouds on the horizon.

“We are coming out of two or three years of strong economic tailwinds; [however]“There will be economic headwinds,” says Max Holland, FEI COO. “The things that have enabled us to be successful in the past two or three years are not the same things that will enable us to be successful in the future. Success does not always lead to success; success can breed complacency if you let it. As you grow and evolve, people feel comfortable in their position. That’s why you need to make a change. You need positive disruption in your business.”

FEI companies have distinguished themselves in the past by responding better, smarter and faster to changes in the market. Howerton emphasized that the group’s members consistently outperform the market, even during slowdowns – up 12%-15% last year. “Our group is very good at sharing,” Howerton said. “And that’s why we’re able to get ahead of the market almost every time.”

However, to continue winning in the future, Graham said the FEI divisions must be prepared to change course and take a different path. “We must be pioneers; we become disruptors. It is good for business to disrupt the status quo, which is a positive disruption.”

Collectively, FEI Group’s division represents $12.3 billion in revenue; they serve single and multi-family contractors in 145 markets nationwide, and most members have backlogs that will get them through the first half of 2023, maybe even longer. “For our Home Solutions division, the pipeline is ready for a good Q1 to Q2 – a healthy pipeline for at least a third of the year; and then a multi-family house is also a positive view,” added Holland.

Labor challenges, however, slow down the housing construction process. For FEI, labor is the biggest problem facing the sector, although in a way the slowdown will help some members to catch their breath after a particularly hectic period. “We’re still waiting 16 weeks for windows and 18 weeks for cabinets,” Holland said.

“Had we gotten all that equipment on time over the past 12 to 18 months, we wouldn’t have had enough people to install it.” Positive disruption is taking shape in all FEI divisions. An example of this is the flooring division, which has made more money from fewer accounts in recent years, but will now have to rely on new account growth as business conditions deteriorate with inflation and rising interest rates.

As Howerton noted, “Our members are ready to move their business to another mode – to be more flexible and easier to change. They feel more confident, better prepared in the event that headwinds arise; as such they will be able to do this much better We are a more agile organization today and can manage this disruption better than in the past.”

The theme appealed to the members. “With the challenges we’ve faced over the past two and a half years, this year’s theme, positive disruption, was perfect,” said Brian Caress, CEO of Redi Carpet, Stafford, Texas. “It reminded us that we are in control of our businesses and our future, and it’s up to us to find new opportunities to improve our performance.”

Robust job growth and consumer spending despite a 40-year high inflation rate of 8.2% don’t often happen simultaneously, and yet that scenario reflects our current economic predicament. So says Mischa Fisher, economist, whose State of the Economy speech was one of the highlights of the FEI Group’s conference.

“It’s a bizarre period to be in,” Fisher told audiences. To curb inflation, Fisher said the Fed is counting on job losses. In fact, the Fed predicts that the unemployment rate will rise to 4.4% next year, from 3.7% today — a figure that implies an additional 1.2 million people will lose their jobs.

In the meantime, floor builders will face headwinds in the form of rising mortgage rates (now over 7%) but also benefit from some tailwinds. Fisher predicted that we won’t see a massive drop in house prices going forward. “There may be a few years of flat growth or small declines, but it won’t plummet,” he explained. “I am more optimistic about equity. Equity is an important fuel for the market. It will be interesting to see how homeowners tap into their equity as cash-out refinancing is no longer an option due to higher interest rates.”

Fisher said rising interest rates mean homeowners will find remodeling a better deal. For example, 93% of homeowners have less than 4% mortgages, so moving out would cost them double that. Instead, homeowners stuck with lower mortgage rates will sit and remodel.

Another healthy sign: People are cash-flow positive, which is why spending is holding up, explains Fisher. For the short term, Fisher is optimistic about multi-family and existing homes (before renovations), but not about new construction.

The long-term fundamentals for the flooring industry also look positive. According to Fisher, 44 million people will live to be 30 in the next 10 years, a potential benefit for builders who didn’t exist during the Great Recession. However, what is worrying is the persistent shortage of skilled workers – a problem that affects all professions and will not go away.

“People don’t enter the crafts,” Fisher explained. “Labour shortages and recruitment in the professions will continue.” Fisher pointed out that there has been a shift in the age at which people enlist; today the average is between 25 and 30, which is older than historical standards. “A slowdown in housing construction will alleviate the constraints currently being felt in the market.

Part of the national convention lineup is the robust educational component of FEI Group, aptly named Learning Academy. At this year’s convention, topics ranged from “Winning the Tax Game” to “Effectively Reducing the Risk of Material Price Volatility and Supply Chain Disruption” and the timely “Winning the Talent War.”

Megan Salzano, FCNews‘ senior editor and digital director, moderated the widely popular session ‘High Impact Leadership’. The panel discussion focused on the power of a consistent and strong leadership strategy, ways to communicate and manage effectively during transition, the power of being agile and how to rise as a leader.

The FEI Group National Conference is more than just educational seminars and networking. The group also wants to give back. With that in mind, the group held the “No Child Hungry Give Back Challenge,” in which dozens of FEI members and suppliers worked on an assembly line to make oatmeal and package it in boxes for distribution. Students from local primary and secondary schools, some of whom rely on school meals, were the recipients.

During this event, volunteers packed no less than 52,000 packets of oatmeal within 45 minutes. “That was the highlight for me, being able to pack 52,000 meals for No Child Hungry in less than an hour,” said Redi Carpet’s Caress. “Now that’s teamwork for a great cause and a great way to give back.”