A Southern Oregon auto dealership that sells and leases electric vehicles will soon be powered by solar photovoltaics. TC Chevy has been around since 1985 and recently opted for: Tracker Solar Energy to install dual-axis solar trackers in the parking lot. 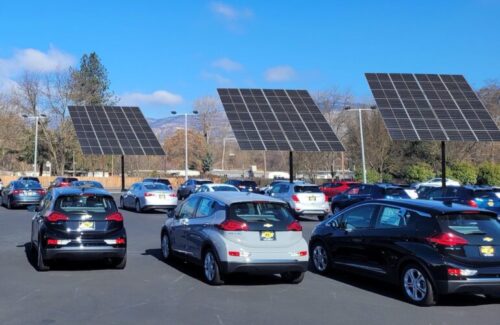 “We believe in advanced technology,” said Derek DeBoer, third-generation owner and operator of TC Chevy. “Our cars and trucks are equipped with the latest designs and manufacturing methods, and we wanted a solar energy system that does the same.”

Each of the five dual-axis solar trackers will carry 28 LONGi 445-W bifacial solar panels atop its 20 ft pole. They will feature powerful LED backlighting to illuminate the display. The entire five-Stracker system will produce 140,000 kWh of solar energy per year.

“We are very aware of the local sentiment towards clean energy and sustainability,” said DeBoer. “We felt it was time for a car dealership to move beyond just selling electric vehicles and take the lead in implementing clean energy measures.”

Construction work on the site will start at the beginning of August, with the digging of trenches and the laying of pipes for the solar trackers. The installation of the Strackers is planned for the end of August.

“We are excited to finally move forward with this project after unprecedented delays in Pacific Power and supply chain,” said Jeff Sharpe, Founder and CEO of Stracker Solar. in Southern Oregon!”

Exclusive: One on one with ‘Mr.’ Shaw