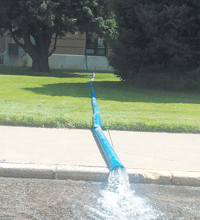 For years, a hose has been rigged every summer to carry water from a courthouse window to Fourth St. and discharge into a town sewer grate next to the curb.

The water is not coming from a broken pipe or a tap that cannot be closed in the courthouse. It comes from an entire system that is broken: the heating and air conditioning of the courthouse, which was installed in 2014.

Top county officials are in a long legal battle with the drill and the system designer to determine whose responsibility it is to fix the system. The legal dispute is now in its fourth year and appears to be headed for a follow-up, perhaps more than one trial this year, according to court records.

The well and pipework were installed by Nebcon Inc. from Omaha. The designer was the ME Group of Lincoln. The question of which company, if any, was negligent in the installation and who would have to pay for the losses remains unanswered.

If the HVAC system were working properly, the water running out of the window would be channeled into the ground through the geothermal system.

If all goes well in a geothermal system, the water will come out of the ground at a temperature of about 50 degrees and the temperature will be collected in a heat exchanger and sent through the building for heating or cooling, depending on the season. The “outlet” water returns to the ground to be “reset” at 50 degrees.

But in the courthouse system, the inlet water temperature gets too cold in the winter and the inlet water gets too hot in the summer, indicating that the inlet and return water is mixing somewhere in the well, which shouldn’t happen.

If the water entering the building is too hot or too cold, the ability to transfer heat is reduced and the HVAC system becomes very inefficient.

The problem became apparent shortly after the system started working in 2014.

Last fall, provincial commissioners considered finding a better solution to the situation than a hose to the gutter. They considered drilling a test well on the grounds of a courthouse to see if water could be injected back into the ground.
But the county fell through with the put, given the legal complications of the uncertain lawsuit.

That lawsuit is progressing slowly but surely. On May 4, Lincoln County submitted its witness list to the court, consisting of 15 individuals, including county officials and personnel from the two companies working on the initial installation.
Along with the witness list, a statement by a professional engineer was submitted to the court. The engineer was hired by the county legal team to analyze the whole situation.

In his written statement, the engineer notes that the original well is a “single well injection extraction system”, which is relatively rare.

He found no evidence of unforeseen circumstances underground that would adversely affect the design. But the engineer discovers errors at both ME Group and Nebcon. According to his statement, both companies have failed in their task.

The next step in the dispute is to determine whether the statute of limitations applies. ME Group says the time is up to hold their company accountable.

That question will be decided at trial, the court said. Following a preliminary conference on Thursday, May 13 at Dawson County District Court, the trial date was set for September 28. Unless something changes before then, a six-member jury will decide whether the statute of limitations applies in this case.

The cost of another well is estimated at about $ 240,000, according to a court document, which would be a significant expense for taxpayers.

So far, the county has paid Nebcon $ 221,913 for the existing system, for which they want to be reimbursed, along with their legal bills.

Meanwhile, the quickest remedy is the one that looks so strange to people passing the courthouse – directing water from a window to the rain gutter in the street. That could happen again this summer.

It looks like it will be several months before a more permanent cure is found.