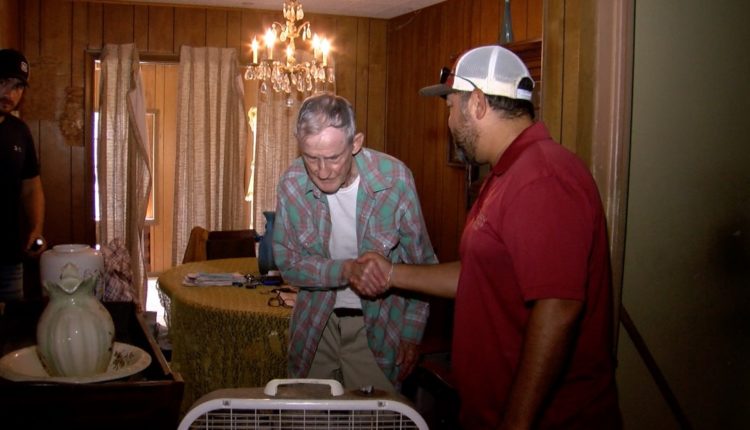 CORPUS CHRISTI, Texas – Once again, the Coastal Bend has risen to help a veteran in need.

The response to Monday’s story about Troy Stump has been great, with several contractors reaching out and offering their services to help the house get back to shape.
On Tuesday, those contractors came by to make estimates.

Stump, 85, has been unable to make repairs to his house for years. His family bought it in the spring of 1963 and it was bequeathed to Stump by his mother when she died in 1981.

Aid arrived on Tuesday for the US Army veteran of the Cold War.

Frank Peralez from Building and renovating ABC was one of the first contractors on site.

“One of my biggest fears is getting old and not doing what I love to do,” Peralez said. “We’re going to do the inside work; the electricity, the plumbing, the slab rock. I have Garrett with Garrett’s Plumbing here to help me with the plumbing, we’re going to get it right.’

They also replace Stump’s nearly 40-year-old water heater. For Peralez, it is an honor to serve an elderly veteran.

“That’s one of the most important things, taking care of our seniors and not forgetting that we will be there someday,” Peralez said.

“It is truly an honor and a gift to be able to serve and give back to him,” added David Galvan.

Galvan says his father told him the story of Stump. their business, Galvan Roofing & Construction will fix Stump’s roof.

“It’s getting all new plywood, all new decking up there, all new clapboards,” Galvan said. “He has no ventilation up there, so his roof can breathe. We will have to ventilate the whole roof.”

Another contractor came by and said he would build Stump a railing. the non-profit Hope from Texas came by with lunch for the contractors, and a promise to come back later that afternoon with a fridge full of groceries for Stump.

Again, the response has been great, so much so that Veterans in Focus has not been able to get back everyone who called. On behalf of Stump and his sister-in-law, we thank everyone who graciously helped.

Contractors say work should be done in a few weeks, we’ll have another update as soon as it is.