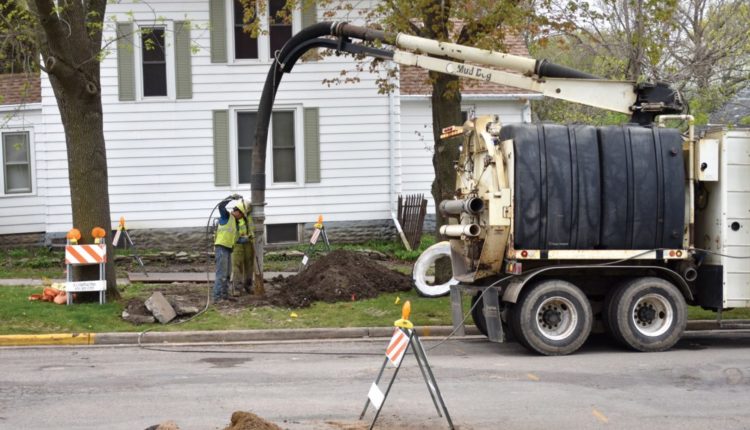 The construction of a number of projects for this summer in Blue Earth has started. The 10th and Nicollet Street project began with crews moving buried power and gas lines to the left.

The city of Blue Earth owns quite a few buildings in the city, and that translates into many roofs that need maintenance.

During a work session before their regular meeting on Monday, May 3, the city council received a detailed update on the condition of at least a dozen city-owned rooftops.

“The roof inspections were done by Kato Roofing or Mankato,” city ​​administrator Mary Kennedy told the council. “They rated all roofs from A to F, where A means the roof will last 12 to 15 years, while other qualities have fewer years to replace.”

In addition, there was an extensive list of what repairs to make on each roof.

The Blue Earth Wine and Spirits municipal liquor store was rated A, but still has $ 1,300 in repairs to be made. The Blue Earth Community Library was rated C and is in need of $ 7,125 in repair.

The City Hall has several roofs as part of the structure, with grades from B to F, and $ 12,540 in repairs needed.

The council discussed caring for some of the required maintenance and repair items, as well as budgeting in the future for additional maintenance costs or possible future replacement costs.

At the end, they decided to let the staff continue to study the matter and not make any decisions during the work session.

In other matters during the ordinary meeting: the board:

• Approved payment claims for work on two duplex homes being built by Mankato’s APX Construction, one on Fourth Street and one in the new housing estate.

• Also approved a contract to provide engineering services for both the Nicollet-10th Streets and Walnut Street construction projects with Bolton & Menk Engineers for up to $ 375,000.

• Approval of a new fee schedule for renting facilities at city parks, including picnic shelters and ball courts. All were listed as $ 50 per day, plus some additional charges for trash removal, etc.

• Approves the recruitment of a part-time employee at the liquor store, Leslie Lewis, as well as authorizing Public Works supervisor Jamie Holland to advertise a summer internship at the wastewater treatment plant.

• Voted to have the city act as a tax agent for a grant that would be used to have a mural painted on the east wall of the American Legion Hall building.

The grant would come from the Southern Minnesota Initiative Foundation and the Huisman Family Foundation to the city, who would then pay the cost of the mural.

• Attended a private session to discuss an employee issue at the Blue Earth Wine and Spirits store. When the council returned to public session 45 minutes later, they received two votes. The first, to take the matter to the next meeting, failed to pass a 4-3 vote, with Mayor Rick Scholtes and Councilors Glenn Gaylord, Dan Warner and Wendy Cole voting no and Councilors John Huisman, Russ Erichsrud and Marty Cassem voted yes.

The second motion, to end the employment of liquor store employee Molly Halvorson, was passed 5-2, Aldermen Huisman and Cassem voted no.

Include timeless touches when designing a bathroom