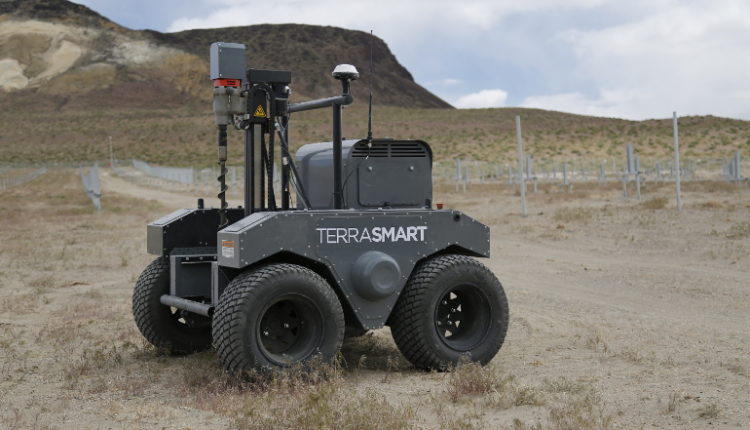 Check out these robots made specifically for the solar industry

Robotics and automation have been active in the solar industry for years. Visit a solar panel production facility (Like it SPW did when checking out Silfab Solar in Ontario) and you will find robotic arms that assemble cells into strings, solder wires and seal back plates. If the sheep just aren’t enough, an autonomous mower can save a lot of time and effort when it comes to vegetation maintenance. Texas company Renu Robotics has developed the Renubot over the years, using DOE grants and prize money to fine-tune an autonomous tractor with a 63-in. cutting deck that uses GPS and lidar to map and mow under and around solar panels. The mower is powered by lithium batteries that are quickly charged in Renubot’s proprietary docking case.

The mower can work day and night and adapts quickly to changing conditions and environments. Renubot uses multiple sensors to determine the location, whether obstacles are present and where to go next. After its start in the dusty regions of the Middle East, the Echo pair solar panel cleaner uses that extensive experience to expand its presence in North America. Autonomous robots travel through both fixed tilt and tracking systems to clean panels without water. Each Ecoppia robot has its own built-in solar panel for power supply. The Ecoppia AI platform initiates cleaning based on weather conditions and other situations, ultimately developing the optimal maintenance schedule for its environment.

The E4 robot (for fixed-tilt) travels along its own path over a row of modules, floats above the panels and cleans them with a rotating microfiber cloth. When finished with a row, the robot is securely attached to the edge of the array, protected from the elements and no shadow on the row of panels.

The T4 robot (for tracking systems) acts more like a Roomba moving freely across rows, but more aware of its location so it doesn’t fall off. The T4 also uses a spinning microfiber cloth and lights at the end of the row after the job is done.

Last year, Ecoppia received a $ 40 million investment from US real estate company CIM Group, which will allow the business to expand geographically. With over 16 GW in cleaning deals, Ecoppia could soon add a few more gigawatts as it ditches its water-free cleaning robots.

For hands-off assistance with surveying, provider of ground mounted solar energy solutions TerraSmart uses its Autonomous Precision Survey Rover (APSR). Coordinate files are uploaded to a tablet, after which the APSR sets to work on its “mission”: surveying and drilling pilot holes for ground screws. The battery-powered robot (with backup gas generator) can drill up to 1,300 pilot holes daily. Traveling at a maximum speed of 11 mph and over slopes up to 45 °, the APSR drills 2-inch wide holes.

TerraSmart has three of its own rovers that it uses for its own projects. Where an average human crew can locate 200 measurement points every day, the APSR is significantly faster and more accurate.

“Every time we use the APSR on a project site, the rack installation phase is faster, smoother and produces better tolerances,” said Ashleigh Kent, TerraSmart Marketing Director. “The APSR works best in larger land locations that contain less rock. It provides a faster and more accurate installation. “

Unloading and racking solar panels in large utility areas could soon be automated, thanks to a $ 1.9 million DOE award from RE2 Robotics. RE2 aims to apply its autonomous outdoor robotic technology to solar structures and improve the solar field assembly process.

“The solar construction process today is largely manual, with large amounts of repetitive tasks for very large projects. By developing technologies that make the process more efficient, solar will become an even more economical energy source for the future, ”said Jorgen Pedersen, president and CEO of RE2, in a press release.

RE2 is currently working with companies such as Array Technologies and Mortenson to see how mobile robotics can help build utility-scale solar energy.