Solar panels are marketed as a “set it and forget it” power source that will generate electricity for at least 25 years. Los Angeles based residential installer Forme Solar Electric (No. 256 on the 2022 Best Solar Contractors List) understands that there are plenty of instances where solar panels fail – enough in Southern California alone to start a business focused on residential solar repair. 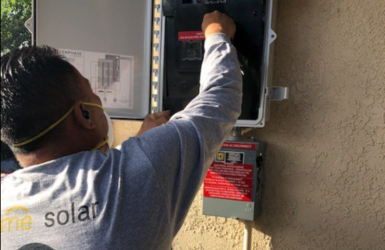 “It’s literally so people can realize the benefit they’ve paid for. In the end, what’s misleading us is that we know someone who has spent all this money and is in a hole with their system and they don’t even manufacture it,” Duong said. “They can’t get help. There are thousands of installers of solar, but try to get one on the phone to fix a system they didn’t build – it’s almost impossible.”

Forme Solar (pronounced ‘for me’) was established to provide third-party repairs to solar system owners who are unable to schedule a service visit with their original installer. The company often submits repair requests for systems installed by contractors who are now out of business and larger installation companies that put system owners on waiting lists for months.

“There isn’t enough focus on repair,” said Terry Kim, COO at Forme. “Nobody wants to wait three months to get their car up and running again. There is a need for a better infrastructure for [solar] repair.”

Many of the systems that Forme Solar repair technicians encounter have failed on an electrical level. Inverters installed ten years ago die and are often out of warranty; cable ties break and leave the wires hanging and are prone to short circuits.

“The solar equipment itself doesn’t really break down. The biggest misconception in solar energy is that everyone cares about panels. My calculator has a solar chip that still works beautifully. The things that break are the inverter or the wiring,” Kim said.

Ultimately, that experience with solar repairs prepared Forme Solar for its foray into installation. Fulfilling warranties, replacing components, and rewiring systems has resulted in the company installing systems that require less repair.

“We can make a business out of repairing systems that we haven’t installed, but I can tell you that if a company has to go back multiple times and install the right thing, it literally sucks out the profit margin you could have on a job. hope,” Duong said.

Today, approximately 60% of Formes’ work output is installation and the remaining 40% is repairs. In 2021 alone, the company installed nearly 3.2 MW of solar power.

“We want to do more on the repair side, but because of the things we do on the repair side, we have a very strong referral activity at the same time,” Duong said. “There’s a tremendous amount of goodwill that comes after you fix one solar system right.”

And with the constant growth of the US solar market, the demand for repairs will undoubtedly increase as well.

“It’s an area that’s in huge demand and, frankly, huge responsibility,” Kim said. “It’s the worst thing to leave a customer where they feel powerless, where they can’t get results from the utility company or whatever. It’s nice if they can finally find a place where that can be solved.”