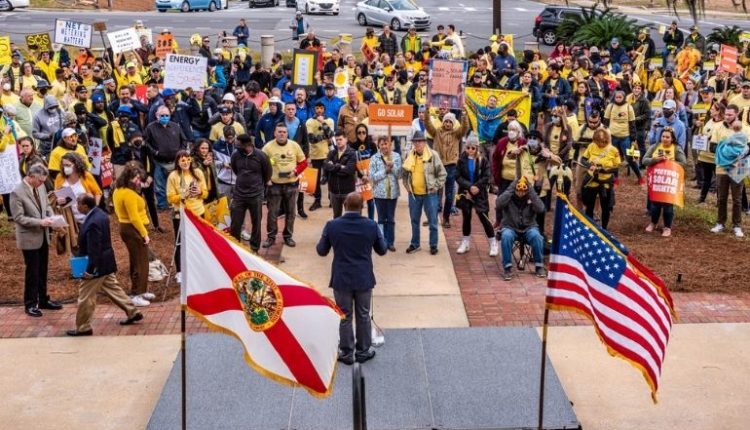 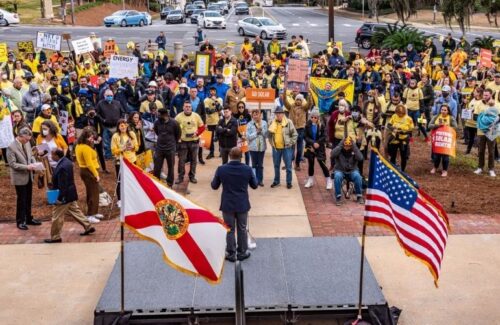 It’s a tale as old as grid-tied solar. Utilities see rooftop solar as a threat to their business model, so they spend money and lobbying time convincing legislators to cut net metering. Solar advocates fight back, and the laws are either halted or passed, to either the joy or detriment of the solar industry.

Advocates say net metering is important when solar technology hasn’t taken off in an area yet — solar may be expensive, but it’s good for the environment and for the grid, so people should be incentivized to invest in it.

As a state’s solar market matures, though, there’s much more nuance to the debate. Two of the most visible net-metering battles are playing out in states whose solar markets are at different stages of development. Although the specific solar industry objectives aren’t the same in California and Florida, the policy requests are: Make only data-driven net-metering changes, when the time is right, and ensure those changes encourage growth over time rather than stopping and starting the market.

“The industry is willing to participate in discussions around net-metering reform whenever it’s warranted,” said Sean Gallagher, VP of state and regulatory affairs at SEIA. “But what we want to see is reform that is driven by some data, that is gradual so there’s not abrupt changes to the system, and that can be easily understood by customers and by companies who have to sell to customers.”

California is the No. 1 solar state in the country thanks to its progressive renewables policies, ample sunshine and high electric rates. Net metering was first established in the Golden State in 1995 with the adoption of Senate Bill 656. The California program’s concept, which is also modeled in other states, is to give solar homeowners a one-to-one financial credit for power generated by their on-site systems that is fed back into the power grid for use by other utility customers. 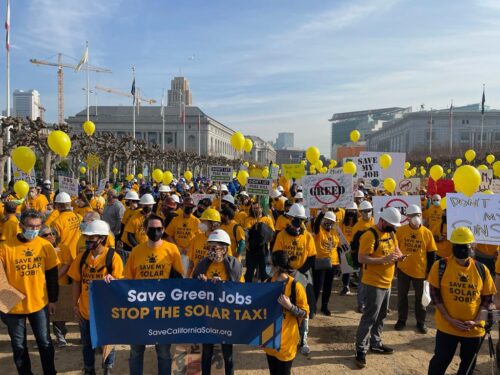 Some adjustments to net metering were made as participation grew, and the legislature laid out the modern terms of the program in 2013’s Assembly Bill 327.

Guided by the bill’s language, the first large change to the rule by the California Public Utilities Commission (CPUC) took place in 2016 with “NEM 2.0.” This new program added a one-time interconnection fee, non-bypassable charges and, most notably, residential time-of-use (TOU) rates to encourage self-consumption during peak hours using batteries. The commission planned to review NEM 2.0 in 2019 in case of inevitable changes in the policy environment — for example, the federal investment tax credit being extended, cutting costs further for solar customers.

In 2020, the CPUC started creating a successor program to NEM 2.0, with the goals of ensuring that compensation both “balances the costs and benefits of the renewable electrical generation facility” and “allows customer-sited renewable generation to grow sustainably among different types of customers and throughout California’s diverse communities. ”

The solar industry did not think the proposed NEM 3.0 decision submitted at the end of 2021 accomplished those goals. The proposal included a shift to net billing, which is when the rate for the incoming power and the compensation for the exported power are different; grid-use charges that would’ve been the highest in the country; and a transition credit to try and ease the blow. Analysts at Wood Mackenzie found this proposal would cut California’s residential solar market in half by 2024.

After a swift and strong response from solar homeowners, installers and advocates, the commission delayed the decision-making process to review the arguments of both the utilities and solar industry, and consider revisions to the decision.

Some in the solar industry celebrated this delay as a win, but the conclusion is still coming at some point.

“We have not won anything here, and I worry that the delay is working against us at this point. The commission is caught in the middle of a tug-of-war and delay doesn’t necessarily help,” said Brad Heavner, policy director for CALSSA. “We want to get this done. We want sensible policy to start getting phased in right away.”

The solar industry is confident the commission will come out with a revised proposal, likely during its March 17, 2022, meeting. But what’s in it is still a mystery.

“We don’t know how far they’ll change things, if it’s just a little bit or a whole lot. That’s the biggest question, because the people that are meeting with them right now are a wide range of stakeholders,” Heavner said.

CALSSA is insisting on three main elements to the revision:

The solar organization isn’t saying there needs to be one-to-one net-metering compensation for solar power at this stage of market maturity. California has steep electric rates in general, so residents can save money by going solar faster than they can in states like Ohio with low rates.

“If rates are right there on the order of 25 or 30¢/kWh in California, you don’t necessarily need full retail net metering at a one-to-one rate in order for the customer to be able to save some money on their utility bill and make a rational, economic decision to go solar,” Gallagher said.

The industry is asking that export rates decrease gradually to give the next crucial technology time to scale.

“I think we can live with going to very low export rates, as long as it’s transitioned over time, and we have time to ramp up battery manufacturing and installations,” Heavner said. “Once batteries are ready to go at full-scale, we’ll be able to not export in the middle of the day, which is what the grid wants.”

according to a report by Lawrence Berkeley National Laboratory8% of residential solar installations were paired with batteries in California in 2020. Compare that “attachment rate” with Hawaii, which has the highest storage attachment rate of any state at 80%, due to net-metering reforms that incentivize self-consumption .

CALSSA is estimating it will take California eight years to get to a 90% attachment rate, the percentage the organization says will indicate the net-metering/net-billing program did its job to make the solar + storage market blossom. So solar advocates are asking for an eight-year glide path, slowly lowering export compensation rates and paving the way for solar + storage.

Although battery costs are decreasing, they’re still prohibitively high for many consumers, and supply chain issues can make them hard to come by even when people can afford them. Heavner said the CPUC understands battery availability is an issue right now, but they don’t understand that continuity of the solar market is crucial to sustaining the residential renewables market.

“We’re talking about small businesses that need to have continuity to stay in business,” he said. “The commission would prefer a dream world where the solar goes away for a little while and it comes back with batteries. That’s just not practical.”

Although Florida jumped in the national solar rankings to the no. 3 spot in 2021, the bulk of its solar portfolio comes from the utility-scale market. Residential solar makes up just 10.7% of the state’s total 7,765 MW installed, according to Florida Public Service Commission data. Yet, one of the state’s investor-owned utilities, Florida Power & Light, lobbied for a bill to eliminate net metering and only credit rooftop solar customers the avoided cost value determined by the utility, which is bound to be far lower than one-to -one net metering. 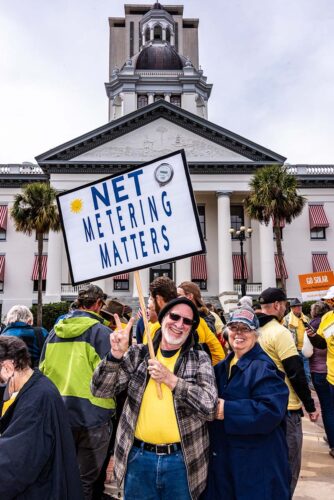 State House Bill 741 and Senate Bill 1024 are currently working through the Florida statehouse. Hundreds of solar advocates, including Sunrun employees, traveled to the state capitol building to protest the legislation in early February.

“I think what’s most surprising and disturbing, and quite honestly absurd, about the legislation is that FP&L is proposing to eliminate net metering and be able to add fees on customers when they are not even at 1% net-metering penetration in the state, said Amy Heart, VP of public policy at Sunrun.

Advocates say Florida is one of many states where there’s just not enough rooftop solar for utility arguments against net metering to make sense. Those arguments are typically about the “cost-shift” of grid maintenance fees to non-solar customers.

“The great majority of the states, there’s just so little rooftop solar that net metering isn’t going to cause any trouble for anybody. It’s a way to get programs off the ground and to give customers an opportunity to go solar,” SEIA’s Gallagher said.

Heart said Sunrun and the Florida solar industry are entirely supportive of initiating a study to look at the costs and benefits of solar and solar + storage on the grid, but no such study was done before bringing this new legislation to bear.

“What’s frustrating for the industry is that this is an opportunity for the utilities and policy and the solar industry to work together to leverage these benefits of rooftop solar and storage,” she said. “Our door is open. We always encourage collaboration to be able to help the utility meet their needs, but also make sure that customers have reliability with solar and batteries.”

Sunrun is currently doing just that with another Florida utility, Duke Energy. Sunrun has developed a bring-your-own-device pilot program with Duke to test the benefits of a residential battery-based virtual power plant for Florida’s grid.

“There are going to be future weather-related outages in Florida. full stop. So how can we work together to make sure we’re offering the best solution?” heart said. “That’s where our focus at Sunrun is. Unfortunately, we have to be distracted by these old, tired debates instead of thinking forward to the future of how we can work together.”