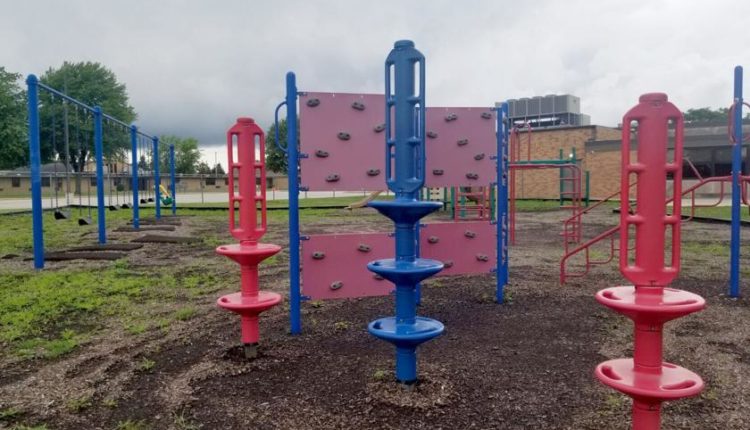 BOURBONNAIS — Bourbonnais Elementary School District 53 wants to use some of its COVID-19 funding by tackling a list of facility projects, including some that have been put on hold due to the pandemic.

At a facilities committee meeting Wednesday, members of the Bourbonnais School Board discussed two of the major projects on the district’s priority list: building new playgrounds at two schools and replacing nearly 30-year-old HVAC units in the Bourbonnais Upper Grade. Center.

The neighborhood wants to build new playgrounds, starting with two of its five schools: Liberty Intermediate, which currently has no playground, and Shabbona Elementary, which has older playground equipment.

Assistant Superintendent James Duggan said the district was planning to build a playground in Liberty after the expansion was completed and fourth-graders moved into the building. However, the timing of the COVID-19 pandemic pushed this project on the back burner.

“Then came COVID-19, and it was all we could do to get the kids in the building and going to school,” Duggan said. “There are currently 800 students in Liberty and no playground.”

The only basketball courts in Liberty are located in the parking lot, which is now primarily a bus traffic area, so they are inaccessible during the school day, he added. On Shabbona, children sometimes get injured playing on the old equipment and are asked not to use it, he said.

The new playgrounds would feature molded rubber floors, which would improve safety and accessibility, Duggan said.

Currently, three of the district’s four school yards are covered in bark, which is not considered ADA accessible, particularly for wheelchairs.

“We find it difficult to [bark], and it’s a big labor effort every summer to distribute them,” he said. “And after about a week of the school year, they are no longer where we distribute them.”

Duggan noted that there is a recommended thickness for playing surfaces ranging from 4 to 9 inches based on the equipment around.

“Ours are actually getting less safe every day, I’d say, as kids kick the chips around,” he said.

Alternatively, the cast rubber floors can be installed in the recommended thickness and last 20 years; the only maintenance required is a slight refurbishment after 10 years.

Chief Inspector Adam Ehrman noted that molded rubber surfaces are often expensive, but the hope is that the new playgrounds will qualify to use CARES Act funding, as they could be considered additional outdoor space in the classroom.

“[Recess] is a lot of running around outside and walking around wishing they had a playground,” he said.

The council’s vice president, Stephan Moulton, said he agrees that the district should investigate the playground project and at the very least determine what the cost would be.

“This would literally benefit all students, not just some of our students,” Moulton said.

Another project on the horizon is the replacement of aging HVAC units at BUGC.

Dennis Crawford, the school’s chief operating officer, said the district replaced six of the 13 rooftop HVAC units at BUGC in 2018.

“When we appealed to them three years ago, they failed; they weren’t working as efficiently as they should,” he said. “It’s better to be in front of them than to have them laugh at us halfway through the school year.”

Although everything needed to be replaced, the district started with the six units that had the most problems. The idea was to move to the other seven the following school year, but the project was delayed due to the COVID-19 pandemic, he said.

With federal CARES Act/ESSER funding now available for schools, the district is finally looking to remove the project from its list.

BESD53 is expected to receive a total of more than $6 million from the second and third rounds of federal COVID-19 relief. Districts are getting some insight into how the funds could be used, although at least 20 percent should address learning loss immediately and the funds won’t be available until 2024.

One of the allowed uses is improved airflow and air quality in schools, so the plan is to use that funding for the HVAC project.

Crawford said replacing the six units in 2018 cost just over $1 million, and replacing the remaining seven units, which are now 28 years old, is expected to cost about $1.5 million.

Architect Doug Bright noted that costs have risen in recent years and are likely to continue if the project is delayed. He also noted that the life expectancy of these units is about 25 years.

“Our ideal scenario would have been to replace the next seven the summer after the six, because now there is two or three years of age difference,” Bright said. “Actually, it’s something that needs to be done.”

Some of the other projects listed for potential use of the funding include: bleachers at the BUGC gym, plumbing and insulation at Shabbona and Shepard, all-gender bathrooms at BUGC and Liberty, replacing hallways with carpet by tiling and installing new windows at LeVasseur, and contactless water stations at BUGC.

How Hiring a Professional Roofing Service Can Help with the Safety of the People? – Film Daily