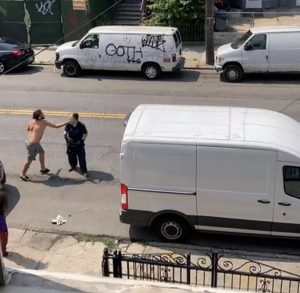 The attacker who punched a man in the face in Boro Park amid a parking dispute has been arrested.

Police say Adam Franco, 26, was arrested Thursday night and charged with assault. tell shomrim Hamodi that the man surrendered to the police.

About 11:45 a.m. Wednesday, a plumber stopped at a job on 39th Street between 12th Avenue and Fort Hamilton Parkway and parked his van in a driveway.

The plumber said he would move the van if Franco had to pull his car out of the driveway, but Franco then punched the plumber in the face, causing him to stagger backwards and fall. The 54-year-old man lay on the ground for about eight seconds before getting back up.

The victim suffered a bruise under his eye.

Franco fled with his wife and a baby.

Six neighbors interviewed by Hamodi say Franco is known for getting furious when someone approaches his driveway — which is an illegal driveway, according to Community Board 12 District Manager Barry Spitzer.

“He’s a scary man,” said a neighbor. “He’s a terrible person. He’s very mean. If someone comes near his driveway, he yells.”

“We are terrified of this man,” said another neighbor. “If he’s outside and we have to walk past his house, we’ll cross the street. We are not walking in front of his house.”

The neighbors have all spoken Hamodi on the condition of anonymity, repeatedly emphasizing their fear of their identity being revealed to a man they fear.