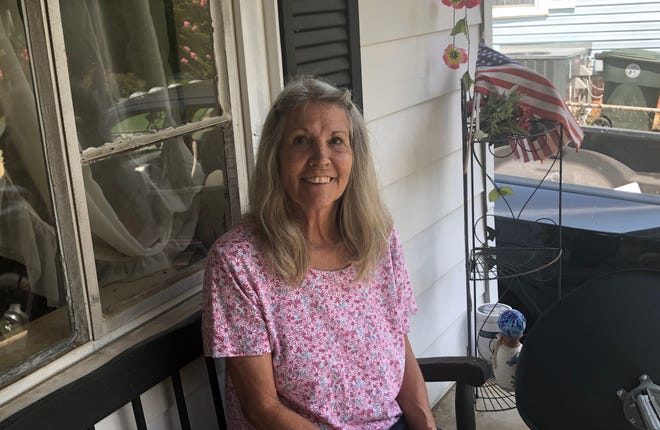 When Lynn Smith returned to her family home in Asheboro, it was in a state of disrepair.

Before her mother died, Smith promised her that she would fix the house. She spent the next seven years renovating the house and the only project left was the roof.

Two years ago, Smith repaired the roof on her own, trying to buy time before buying a new one.

Then her neighbor told her about a program through Purple Heart Homes that gives free roofs to veterans.

On Monday night, Smith moved her last pot to catch the water leaking from her ceiling. Tuesday she got her new roof.

The Roof Deployment Project gives free roofs to veterans in need of assistance. Developed in 2016 by Owens Corning Roofing, the program has donated more than 275 roofs in the years since.

Veterans sign up for the project through Purple Heart Homes, and the company selects people who qualify for the free rooftops.

“Our purpose was to serve; that’s one of our greatest core values: having the heart of a servant,” Wilson said. “We work really hard to make sure we’re serving in some way.”

Skywalker Roofing has installed five roofs for veterans in need, and Wilson said they find that with every person they give a roof to, that person serves the community in so many different ways. For example, Smith works in home care as a way to give back to the community.

The program is open to veterans who are in financial need. People can apply to Purple Heart Homes website and need their DD Form 214 to prove military service.

Smith moved to Asheboro at the age of 5 and spent her childhood in a white house on Holland Street. When her family moved in, the house had only two bedrooms, not nearly enough to house her burgeoning family. Smith and her two sisters slept in the attic.

“The house was full of love,” Smith said. “We didn’t know we were poor.”

Thank you for being a subscriber! It is your support that keeps The Courier-Tribune going.

Smith joined the military as soon as she graduated high school. Her father died when she was 11 from chemical warfare injuries he experienced during the Vietnam War. Smith’s father inspired her to join the military.

When Smith arrived at Fort Gordon military base in Georgia, where she was to be stationed, she passed a sign she recognized for a town called Grovetown. She tried to figure out how she knew that sign and realized she’d passed it on her way to her father’s funeral.

Smith didn’t realize it until then, but her father was stationed at the same base. With the help of a commanding officer, Smith found her father’s grave and was able to visit it while stationed in Georgia.

“I was so impressed that I remembered that silly sign, and it led me back to my father,” she said.

Smith once served in the military and was honorably discharged a little early, when she became pregnant with her first child. Smith stayed until the last minute, waiting until she was eight months pregnant to be fired. Smith’s husband also served in the military, and she spent time traveling with him around the world to wherever he was stationed.

Smith is grateful for her time in the military and in awe of benefits like that Roof Deployment Project she receives for her service.

“Who would have thought I’d pay myself back like that if I joined the army?” she asked. “I mean, the rewards are great. And yet I jumped in to sacrifice my life, but I didn’t have to.’

Smith moved back to her childhood home seven years ago and has been working to fix it ever since.

“I don’t know if Mom got the cheapest contractor she could ever get back, but the poor back of the house fell in,” she said.

Smith tore out part of the wall that had asbestos growing in it. She had central air installed, changed the pipes and repaired the floor.

For the first four years after she moved back, Smith took care of her brother in the house. After his death, a friend with terminal cancer came to live with him and Smith now takes care of her. The house gives Smith the opportunity to help others, and she said she’d be open to letting someone else move in if the opportunity arose.

The roof was the last item on Smith’s to-do list to fix the house.

“This is the last,” said Smith, “and this will keep me in my house forever.”