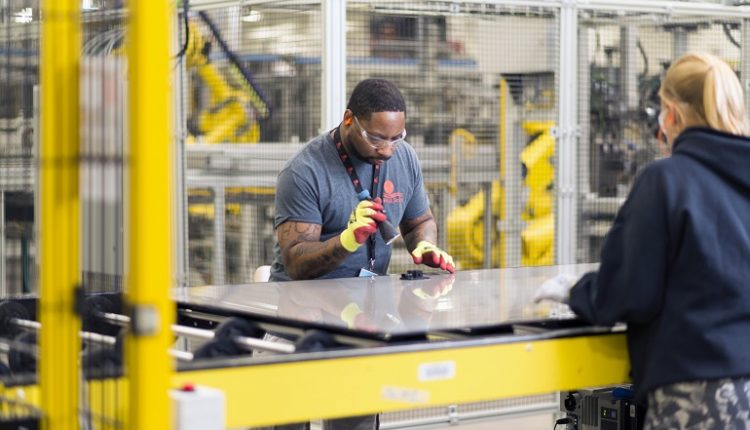 The US House of Representatives this week introduced the America Creating Opportunities for Manufacturing, Pre-Eminence in Technology and Economic Strength Act of 2022 (America COMPETES THE 2022 Act). The law includes significant investment in boosting domestic solar component production to “strengthen America’s economic and national security at home and abroad.” Production of thin-film solar panels at First Solar in Ohio

“Right now, China and other bad actors threaten our national security and global financial stability,” said Maxine Waters, chair of the Financial Services Committee. “This is why the America COMPETES Act is common sense, much anticipated legislation that will finally hold countries like China accountable for the ways they engage in illegal or aggressive activities to harm our nation’s financial system. With this bill, our country and our allies will be stronger and better equipped to compete and push back against these attacks.”

If passed by Congress, this legislation will the sec. of Energy to establish a grant and direct loan program for the construction of new solar component manufacturing facilities and the conversion, modification or extension of existing facilities. Each year through 2026, the Department of Energy would be authorized to distribute $600 million. There are no exceptions in the current language: production facilities for converters, mounting systems, thin film panels, silicon panels, cells and wafers can benefit from this.

“Key elements of this package have already passed the House by overwhelming bipartisan votes, and we look forward to discussing this bill with the Senate to get legislation to the president’s desk as quickly as possible,” said Speaker Nancy Pelosi. “Now is the time to once again boldly and strategically invest in our nation’s future in a way that strengthens the supply chain, lowers costs, and enables America to beat any nation today and for decades to come. ”

Industry response to the law:

“ACORE welcomes the introduction of the America COMPETES Act, which authorizes billions of dollars to build new solar production facilities and expand or upgrade existing facilities, and provides additional funding to strengthen network security,” said Gregory Wetstone, President and CEO of the American Council on Renewable Energy. “The United States must prioritize the development of a 21st-century domestic solar technology supply chain, and this legislation is a fundamental step. These investments will create thousands of high-paying renewable energy jobs, help the United States remain competitive in the burgeoning global solar market, and enable the transition to clean energy through domestic production.”