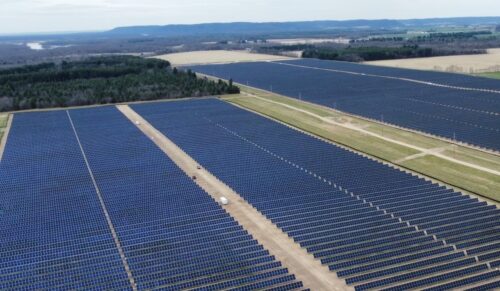 “This project represents a significant long-term investment in our community,” said Van Nelson, the city clerk of Buena Vista. “The municipality really appreciated how well they were kept informed of progress throughout the project. The strong partnership with Alliant Energy and its commitment to responsible stewardship ensures that this solar farm will deliver economic, environmental and financial benefits for decades to come.”

In addition to this site that produces clean solar energy to power homes and businesses, Richland County and the city of Buena Vista will receive an estimated $200,000 in joint revenue each year through the state’s shared revenue program for the next 30 years.

“Across Wisconsin, Alliant Energy is working with families, farmers, businesses and communities to develop renewable energy projects large and small,” said David de Leon, president of Alliant Energy. “This project is an incredible milestone for our customers. Guided by our focused strategy to serve customers and build stronger communities, this solar farm diversifies our energy portfolio, increases U.S. energy independence and increases access to affordable electricity.”

Alliant Energy is following the plan outlined in the Clean Energy Blueprint to build more than 1,000 MW of solar utility power at 12 locations in Wisconsin. The Bear Creek Solar Project is the first of these 12 sites to become operational. Three more projects are expected to be commissioned later this year.

“When companies work with the skilled workforce of Wisconsin’s construction unions, they know they’re getting a safe, quality product that offers superior value to everyone,” said Emily Pritzkow, executive director of the Wisconsin Building Trades Council. “By prioritizing the use of local union workers for renewable energy projects, Alliant Energy supports a strong workforce, keeps project dollars in the community, and boosts our state economy.”

Alliant Energy plans to remove coal from its generating fleet by 2040 and achieve net-zero carbon dioxide emissions from the electricity it generates by 2050. According to the plans outlined in the Clean Energy Blueprint, Alliant Energy’s 12 large-scale projects will create more than 2,000 local construction jobs and provide an estimated $130 million in local tax revenue over the next 30 years.