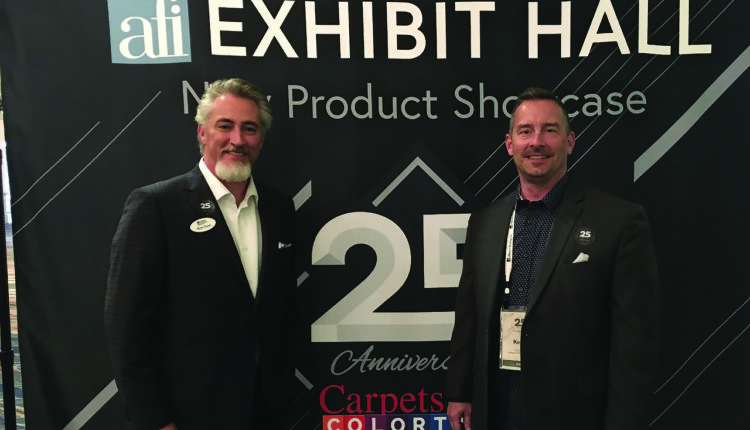 Orlando—As Alliance Flooring celebrated its 25-year history here last week, it was hard not to focus on the group’s bright future. The long-planned succession of executive leadership from Ron Dunn/Jon Logue to Ryan Dunn/Kevin Logue is now complete as the sons share co-CEO duties. What’s more, the 293-member group is aimed to grow as six new members have joined since the beginning of 2022, while 65 prospects are being considered for inclusion.

An often-shared comment among Alliance Flooring members is: “Together we are smarter than any one of us alone,” and that spirit of cooperation and togetherness was again on display for three days here at convention with veteran members sharing valuable time with newcomers.

For Michael Barta and his wife, Madison, proprietors of Signature Flooring & More Manitowoc, Wis., joining forces with Alliance Flooring in 2022 was not their first consideration. They were initially interested in purchasing a CarpetsPlus store but staying independent. However, during the transaction process, which never went through, the Bartas were convinced that becoming members of Alliance Flooring was instead the right things to do. So, they opened their own store. Asked whether long-time members have been helpful in easing their transition, Madison Barta said, “Oh my gosh, the people here are helpful. Everyone wants everyone else to succeed. We’re a family business, and joining a family group like this is important to us.”

That feeling of acceptance was what prompted Strahil Chernev and his wife, Sharon Cherneva, to make the 11-hour flight from Fairbanks, Alaska—nearly 4,800 miles from Orlando. “It’s always worth being here,” Cherneva said. “There are no boundaries here. You can ask anyone anything and they will always take the time to answer. It’s helped our business.”

The couple became Alliance members three years ago after buying an existing business from a retiring member. In each of their three years, sales have increased steadily. “2021 was our best year yet but two and half months into 2022 we are already doing better than at this time last year,” Cherneva said.

Her sentiment was shared by many at the conference. Despite record inflation, supply chain slowdowns and uncertainty in Eastern Europe, the majority of members said business is so busy that it is difficult to keep up. Some retailers did not bring their full contingent of staffers due to robust activity back home. Paul Schallberg, co-owner of Boulder Star Flooring in Colorado, shared that from the moment his store opens to the time it closes, they are swamped. “We have a lot of foot traffic in our store, it’s been steady throughout,” he said. “Business is good.” 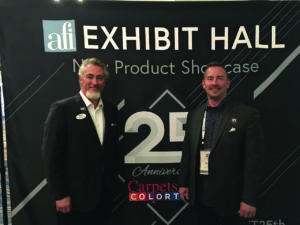 For years, Ryan Dunn and Kevin Logue have been groomed to take over the top leadership role at Alliance from their dads—founders Ron Dunn and Jon Logue. At the conclusion of this year’s conference, that moment arrived.

As such, the two will be tasked with steering the burgeoning group into the next decade and beyond. Among the top priorities is managing growth, which is both a goal and a challenge. “We need that growth to continue where we want to go, but at the same time we are not going to bring in the wrong people,” Dunn said.

Rather than add members just for the sake of numbers, Dunn and Logue said they will proceed slowly, conceding that not every prospect will be a fit. “It’s a process,” Dunn said. “Building trust—it doesn’t happen overnight. Just because people are calling us doesn’t mean we will move quickly. We have to slow things down.”

At the same time, Alliance Flooring wants to grow its ranks and is not afraid to be aggressive. The group has added 32 members since COVID-19 began, and Dunn said it can bring on 24 to 36 new members this year alone; and, one day, it can match their best recruiting year—74 new members, which occurred early on.

“There’s a lot of interest from new businesses with second and third generations; people coming up the ranks or who are getting into a position to pass the business over,” Logue said. “Our growth strategy is to engage the up-and-coming generation of owners.”

Decovita, a ceramic tile supplier known for its glazing technologies and unique visuals, welcomed HGTV celebrity, Donna Moss, to its booth. Moss, a TV host and author who is known as the Queen of Bling, hosted a breakout session titled “Increase Sales, by Design.” She also spent time at the booth discussing interior design trends. “Having Donna here lends credibility to our company,” said Tim Hanno, national director of strategic accounts. “She connects so well with people personally. This show has been tremendous for us, and we love this group; it’s so family oriented.”

That vibe was also felt by Steve Roan, vice president of sales for Decorative Concepts, to tout its woven vinyl products for indoor and outdoor spaces. “These are great people; very loyal to the organization,” he said. “I have met with a lot of new people, which is very encouraging, and not only are they new but many of them are younger people. I haven’t seen this level of youth in a long time.”

In his annual state of the industry address, Jon Logue, co-founder, shared that Alliance retailers were up 26% in hard surface in 2021 vs. 2020 and 17% in carpet (in terms of dollars). As a group, Alliance retailers saw a 23% increase in business, with the average selling price up 7% year over year. Logue cited a Harvard study showing that home improvements and repairs would increase 19% in 2022 to $60 billion—all of which bodes well for the flooring industry. “This is a staggering number the likes of which I’ve never seen before,” Logue said.