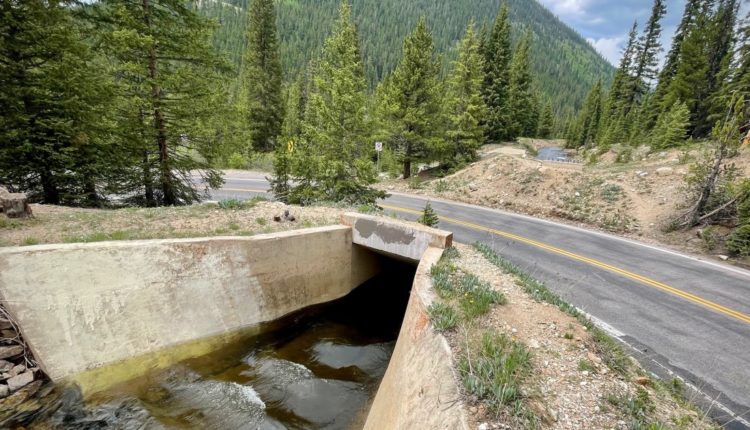 A Massive Plumbing System Moves Water Across Colorado’s Mountains. But This Year, There’s Less To Go Around

High on Colorado’s Independence Pass, a narrow, winding road weaves through the evergreens and over mountain streams, up and over the Continental Divide at over 10,000 feet. At some point, that road crosses a canal.

It’s easy to miss if you’re not looking for it, but that canal is part of the water infrastructure that makes life on Colorado’s Front Range possible.

The state has a geographic discrepancy between where water appears and where much of the population has settled.

“Wherever you are in this state, you are either at the source of the drinking water supply, you are in the middle of the drinking water supply, or you are at the end of the tap,” said Christina Medved, outreach director at Roaring Fork Conservancy. “So on the western slope we are at the source of the water.”

About 80% of Colorado’s water falls on the western side of the state. Much of it is snow and rain in the high mountains that eventually trickles down into streams and rivers like those at Independence Pass.

But about 80% of people in Colorado live on the east side of the mountains. Due to gravity, that water does not naturally flow towards them. Instead, Colorado’s densely populated Front Range relies on a massive piping system to keep drinking water flowing to the taps.

For a century and a half, engineers carved the mountains with tunnels and canals that direct water through the state through trans-mountain diversions. Some of that infrastructure is nestled near the high-alpine headwaters of the Roaring Fork River, which eventually flows through Aspen and Glenwood Springs on its way to the Colorado River. Near the Lost Man Reservoir, a dam and tunnel create a crossroads between water that will follow that natural path west to the Colorado, and water that will be diverted through the mountains east to cities like Colorado Springs.

A tunnel through the mountains draws in water that will pass through two reservoirs and the Arkansas River on its way to the southern part of the Front Range. Water diverted from the Colorado River basin via trans-mountain diversions makes up 60 to 70% of the water used by Colorado Springs. Denver, Greeley, Fort Collins, and smaller Front Range municipalities also rely heavily on Western Slope water.

And these kinds of setups aren’t limited to Colorado. Similar systems bring water to major cities across the region. Salt Lake City, Albuquerque and Los Angeles rely on canals and tunnels to carry distant water in their pipes. New ones are in the works on the Front Range and in southern Utah.

But these systems are not without criticism.

“When you first hear about it, the concept of a trans-mountain diversion is crazy,” said Andy Mueller, general manager of the Colorado River Water Conservation District. “It seems wrong. It seems to contradict the health of the river. And I have to say that all of that is true.”

His organization was founded in the 1930s to counter these diversions and ensure that there is enough water for the people on the western side of the state.

“The idea that a large population center can pull water from a stream hundreds of miles away and bring it to their city for use is hard to accept under the current ecological and ecological values ​​our society has,” Mueller said.

The problem is that contemporary environmental values ​​are not enshrined in the water law of the West. Instead, water use is governed by regulations created when Colorado first became a state in the 1800s. The rules say that if you have the right to use water, it doesn’t matter if you want to use it hundreds of miles from the source — even if it takes miles of pipes.

Right now, there is less water to draw from in every part of the state. The Front Range escaped drought after steady spring rains, but those high mountain areas that are usually a reliable source of water for all of Colorado are facing a different fate. The western slope is deep into the second year of drought, leaving snow cover and river flows lower than they should be.

Mueller thinks this only exacerbates the need for the Front Range to reduce water consumption. While they retain the legal right to use a certain amount of water, he asks them to use less, which he says will promote the health of rivers and their ecosystems west of the canyon.

On the Front Range, those on the receiving end of diversions say they listen to their Western counterparts when they issue distress signals during particularly critical times. They also say that deliberate conservation pays off in the longer term. Nathan Elder, water supply manager for Denver Water, said per capita water usage in his district has fallen by 22% over the past two decades.

“Everyone in Colorado needs to reduce their use,” he said. “We have seen that. And we’ve been successful with our conservation efforts and customer messaging and watering regulations.”

Amid tension between water demands on both sides, exacerbated by extreme drought, is the fact that there isn’t much of an alternative. Colorado’s water system was built to accommodate the fact that the majority of people and most of the water are far away from each other. Without fundamental changes to the foundation of the water law, those requesting water will have to work within a system built on trans-mountain diversions.

“You can’t sustain one without the other,” Elder said. “It has to work together with water from the west slope that transfers to the east slope. Because I don’t see the population picking up and moving the people to the western slope.”

Some contingency planning – within the reality of a diversion-oriented system – is already in place. In Colorado Springs, which receives some of the power diverted from the top of Independence Pass, reuse practices help the city get more miles out of the water it’s being distributed.

Abby Ortega, water resources manager for Colorado Springs Utilities, said recycled water makes up 26% of the city’s total portfolio and the city relies heavily on storage to get through dry years like this one.

But climate change threatens to increase the frequency and intensity of droughts, leaving water managers on edge and looking more closely at ways to maximize available supply.

“Every water planner in the state is concerned about the rapidly declining hydrology of the Colorado River,” Ortega said. “I’d be crazy not to say I was worried.”

This story is part of ongoing coverage of the Colorado River produced by Aspen Public Radio, distributed by KUNC, and supported by the Walton Family Foundation.

Air conditioning repairs could take longer due to part shortage