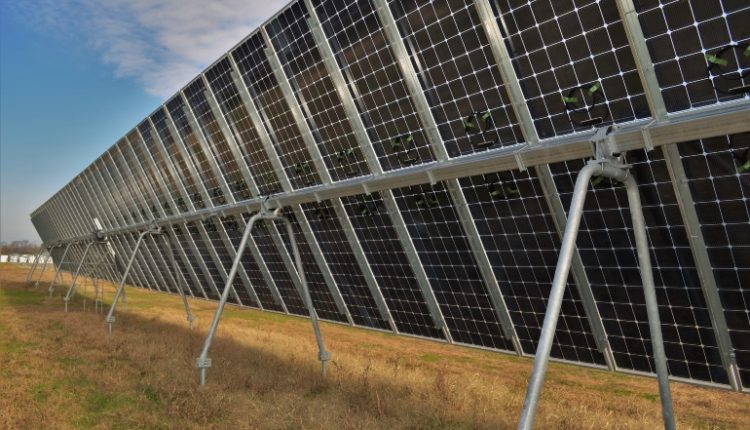 Solar trackers are a common solution for large-scale solar projects, with contractors typically using an I-beam as the choice of mounting foundation. As installers enter new markets such as the Northeast, where the ground is rocky and ground frost is a risk, the Depth I beams need to be driven for good traction.

Many solar and rack manufacturers offer alternative solutions when a simple I-beam installation just won’t work. Two such companies, TerraSmart and APA sun racks, have developed fundamental and full system A-frame solutions to address the problem of placing solar trackers in locations with soils that are too soft, too rocky and frost-prone.

A tracker designed around ground screws

TerraSmart has broken its teeth in the solar mounting market with its ground screws. The turnkey manufacturer, installer and geotechnical service provider has made the ground screw the foundation of its business, and so has its foray into solar tracking. 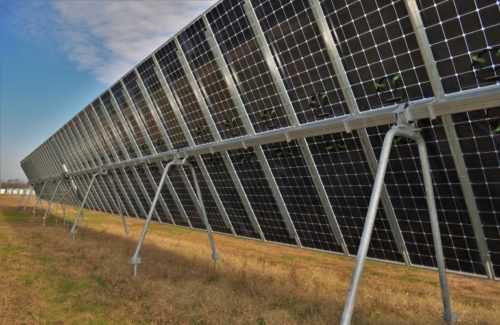 TerraTrak is TerraSmart’s patented single-axis solar tracker and parent company Gibraltar Industries’ flagship system tracking system. The system has an A-frame-style base that uses two ground screws instead of one pile to spread the tracker’s load across two smaller supports.

“I’ve seen other trackers that have been modified through some sort of interface to work with a ground screw, but everything from our first design meeting involved the mindset that we’re going to use ground screws,” said Chase Anderson, senior design engineer, TerraSmart. “We need a tracker that can reach places where piles cannot.”

Now, after four years of development, TerraTrak is a fully realized single-axis tracker system with its own design, network controller and monitoring software.

While there’s more to it than just the fixings, the ground screws that TerraTrak stands on are designed to work in rocky, soft/sandy and frost-infested soils. The threaded portion has more tension in softer soils and creates a cone that resists buoyancy; and with a cored pilot hole, ground screws can be driven and screwed directly into rocks.

“If you look at the kinds of sites that are available, especially in the northeastern United States, there isn’t a lot of big, flat land left, and when there is, it goes to agriculture and other purposes,” Anderson said. “TerraTrak is really good at providing a solution for customers that allows them to install a tracker on land that may not have been thought of before because it has too much terrain, too much outcrop – things TerraTrak can handle very well.”

TerraSmart has been using telescopic legs with its ground screws on its fixed tilt structures for a decade and has brought that feature to TerraTrak, allowing the system to be adjustable within the material length of the posts. The tracker is designed to adapt to undulating topographies, with slopes of up to 20%. Ground screws are driven in early in the installation process, allowing system height to be determined later.

TerraTrak’s monitoring software provides necessary services such as weather analysis, current system output and predictive maintenance. The software can stop operations in sections, allowing technicians to perform maintenance on site while the remaining system continues to produce; and it can store modules during high wind and weather conditions. TerraTrak has already been updated to accommodate large format modules and uses screwless mounting clips that can essentially be hammered to hold panels in place.

“As a company, we provide complete turnkey foundation and scaffolding services for the fixed tilt market,” said Michael Faraone, TerraSmart Technical Director. “We went ahead and did the same for the tracker industry, where we offer full turnkey engineering, design, foundation, tracker manufacturing and installation.”

APA Solar Racking has developed a base that adapts to popular single-axis trackers, giving these systems the option of using ground screws or spiral pile foundations. APA sun racks

“We started developing some concepts and different designs and really decided that this thing has to be light and cost effective because we’re competing with basically a milled beam with a few holes in it,” says Joe Von Deylen , COO of APA Solar Racking.

Where TerraSmart wanted to build an all-in-one system, APA provides a fundamental solution to work with popular tracking models. The A-Frame foundation attachment point uses a standard W-section with the same hole patterns compatible with track structures offered by Nextracker and Array Technologies.

“You can physically take an A-Frame and put it in the field in a row of piles and they will fit and screw in exactly the same,” said Von Deylen.

In those conditions where soil does not have a strong initial uplift on an I-beam, spiral piers and ground screws are designed to embed at shallower depths. APA’s helical fasteners use a helix or flange mounted to the bottom of the post to similarly create a cone of tension above it to resist pull-out.

APA came across uniaxial solar projects where, according to geotechnical reports, installers drive I-beams to a depth of nearly 20 ft.

“The problem with that is, even if you can get equipment big enough to drive a pile that deep into the ground, it’s more than likely you’ll hit something before it gets to depth,” Von Deylen said.

Then other concerns arise about pounding I-beams accurately to that depth and at the right angle.

“If they can’t, they go through it again and bump the stacks to get them within spec,” Von Deylen said. “Over time, the stack just goes back to where it naturally wants to go.”

Given the varying topographical characteristics of solar parks, APA produces A-Frames per project. The APA A-Frame uses a leveling flange on the underside of the structure to adjust the height independently of the screw or ground screws.

Ultimately, APA and TerraSmart are trying to gain a foothold in single-axis solar projects with consistent embedding in soil conditions that would otherwise require driving piles to great depths or major geotechnical work. Installers can now look at multiple mounting solutions for what may have been unworkable land.