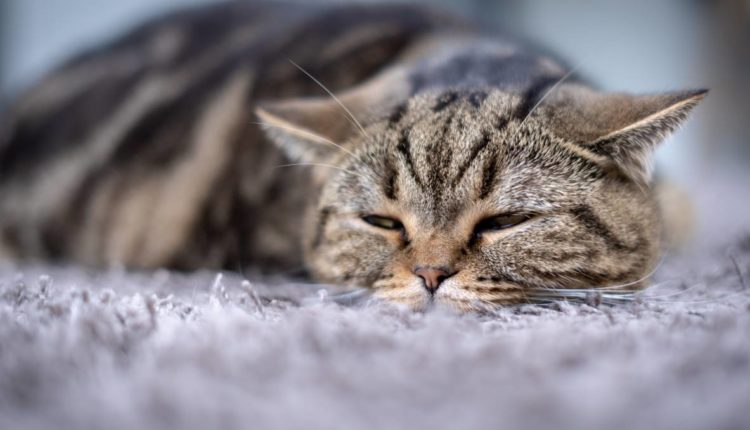 Ureteral obstruction is a life-threatening condition that is increasingly recognized in cats, but it can be difficult for owners to detect.

In basic terms, feline plumbing consists of the kidneys, from which the ureters carry urine to the bladder, and the urethra, from which urine is drained (hopefully in a litter box).

Urethral obstruction causes dramatic clinical signs because it means cats are unable to urinate. Early signs may include straining to urinate, or frequent, unproductive visits to the litter box. Loud vocalization may be accompanied by attempts to urinate.

Without immediate veterinary attention, affected cats may lose their appetite, become nauseous, and vomit. The condition quickly becomes life-threatening as toxins normally excreted in the urine build up in the bloodstream.

Urethral obstruction is usually diagnosed by a veterinarian based on a physical exam and tends to manifest as a firm, painful, distended bladder.

In contrast, ureteral obstruction occurs higher upstream. If it affects only one ureter, cats can still urinate.

Signs may be more subtle and include back pain, loss of appetite and vomiting. In cases I’ve seen, owners report affected cats appearing a bit “in color” or “not themselves.”

In a recent case I saw, the owners reported that their cat Neville had vomited three times, prompting them to make an appointment. He seemed a little sore when he was picked up. But he seemed to brighten up, so they almost canceled.

Ureteral obstruction is not easily detected on physical examination. The ureters can be blocked by crystals or stones in the urine, blood clots, strictures, or even some cases of urinary tract infection. Diagnosis usually includes abdominal imaging (mainly ultrasound) and blood and urine tests.

Neville showed no obvious abnormalities on physical examination. But when blood and urine tests suggested he had developed kidney disease, we performed an ultrasound to get a better look at his urinary tract. It turned out that he had a small stone blocking one of his ureters.

Successful treatment usually requires surgery. The most common approach is to use a device called a SUB (subcutaneous ureteral bypass). In other words, a tube is passed from the kidney, under the skin, and then into the bladder so that it completely bypasses the blocked ureter. This procedure is performed by specialized veterinarians.

The procedure is not without complications. These can include infection and damage to kidney function.

Neville’s owners have had surgery and to date Neville and his SUB are doing well.

Previous studies suggest that male cats, cats that live exclusively indoors and some breeds such as Persians and Himalayans are more prone to forming stones in their urine. Some of these stones can get stuck in the ureters, causing the ureter to become blocked.

Over the past two decades, there has been an increase in the number of cases of ureteral obstruction, although we still don’t know exactly why.

To determine possible risk factors for developing this condition, researchers at Sydney’s Small Animal Specialist Hospital (SASH) reviewed the medical records of cats from the past three years diagnosed with ureteral obstruction.

Ongoing research is ongoing to isolate specific causes of ureteral obstruction and other forms of urinary tract disease in cats.

If you suspect that your cat is not feeling well, it is best to consult a veterinarian in time.